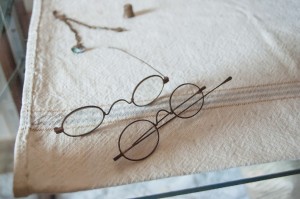 Visitors to the Civil War Camp at the Carter Mansion will be among the first to see a display of unique historic artifacts that recently came “home.”
A new display has been added in the visitor’s center at the historic home that includes artifacts found in the 1970s during an archeological survey. There are also other historically significant materials and displays related to the three sons of Alfred Carter, descendants of John Carter, who built the home.
Sycamore Shoals State Historic Park Interpretive Ranger Chad Bogart said the items had been retrieved from the state’s Division of Archeology to be temporarily displayed at the Carter Mansion this weekend. The long-term goal is to convert the welcome center at the Carter Mansion into an interpretive museum on the Carters and the home.
“This is temporary, but it will become permanent,” Bogart said. “For years we wanted to bring back the things that belong here. We understand the desire to preserve and protect these items, but we feel we can preserve them while sharing them with the public.”
Items in the display include two pair of spectacles, a watch fob that likely held a rhinestone or a seal and a watch key; a thimble and buttons, rifle balls, a stirrup, a piece of a bit from a bridle, a toe plate from a shoe, a spoon, a padlock and a pants buckle.
“Having these items gives people an even better idea of what life was like back then,” Bogart said. “It gives people a chance to see things that were used, worn and cherished.”
The display also includes an original copy of a Philadelphia newspaper from Jan. 8, 1863, that featured a front page story on the Carter’s Raid in Watauga. The raid, led by Samuel P. Carter, was focused on burning railroad bridges to stop supplies to the Confederate soldiers.
“That just shows how big an event this was,” Bogart said.
Bogart said he and Sycamore Shoals Park Manager Jennifer Bauer traveled to Nashville in April to go through the materials that were collected from the Carter Mansion during the study.
“There were 21 boxes to sort through and we brought three boxes home,” he said.
He said most of the items collected were glass and pottery shards, Native American pottery and animal bones.
“We tried to bring back the more unique or whole pieces,” he added.

The historic Carter Mansion will be transformed into a battleground this weekend during the annual Civil War Camp. The Camp... read more