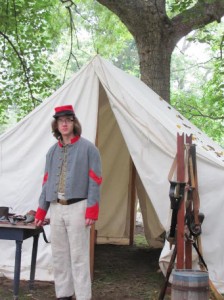 The historic Carter Mansion will be transformed into a battleground this weekend during the annual Civil War Camp.
The Camp will be held Friday and Saturday from 10 a.m. to 4 p.m. on Friday and 9 a.m. to 4 p.m. on Saturday and will include demonstrations showing what life was like for soldiers on both sides of the battle lines during the Civil War.
“We don’t do one side or the other,” said Interpretive Ranger Chad Bogart. “We share stories of both the Union and the Confederate soldiers to show what it was on both sides.”
Bogart said there will weapons demonstrations both days, including both cannons and muskets. One of these weapons is a howitzer cannon.
“The cannon was designed to be taken apart and put on mules to take it into the mountains,” he said. “It was called the mountain cannon.”
Children are invited to participate on Saturday for a good old-fashioned rubber-band musket shoot and will receive a special prize for attending.
Visitors can experience both local and regional history in an educational setting, where visitors can see different uniforms worn and a variety of equipment used by both Union and Confederate interpreters.
Reenactors will also share daily aspects of camp life such as recruit training, military medicine, and traditional camp music.
Bogart said tours of the house will also be given, focusing on the history of the oldest frame home in Tennessee and its involvement in the Civil War.
“There are some interesting stories surrounding the Carter Mansion during the Civil War,” he said. “Legend is that Daniel Ellis, a Union Captain, hid from the Confederates in the Carter Mansion.”
At 3 p.m. each day of the camp, Bogart will be sharing a new demonstration on Civil War medicine. The talk will cover common battle field medicines, surgical tools and 19th century battlefield embalming techniques used by soldiers.
The camp will also include a look at camp life for both Confederate and Union soldiers.
For more information, call Sycamore Shoals State Historic Park at 543-5808.

Photo by Brandon HicksCarter County Board of Education member Jerry McMahan, shown speaking during a 2013 school board workshop, is... read more