Sycamore Shoals program offers look at some of our wild neighbors 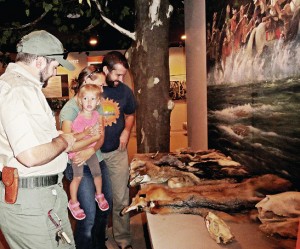 The mountains of East Tennessee are filled with an almost endless variety of animal and plant life.
Some of these animals and plants are of the not-so-friendly variety.
And because telling the difference can sometimes be tricky, there’s a simple tip to keep in mind: If you don’t know what it is, leave it alone.
During a “History At Home” session at Sycamore Shoals State Historic Park Thursday, Seasonal Ranger Tanner Wells offered a look at some of the different types of poisonous plants and snakes found in the area, and also shared information about some of the mammals found in the region.
Wells said there are 40 varieties of snakes in Tennessee – and that four of those were venomous. Of those, two are found in East Tennessee: the copperhead and the timber rattlesnake.
He said other nonvenomous snakes will sometimes take on the appearance of venomous varieties as a way to protect themselves from threats in the wild, but that there were physical characteristics that will give away the difference between a venomous and non-venomous snake.
“The snake’s head shape will be different,” Wells said. “Venomous snakes will have a more triangular-shaped head, and their eyes will be elliptical, like cat’s eyes.”
The best advice when dealing with snakes?
Give them their space and to not try to interact with them.
“Even if it is a nonvenomous snake, give it its space,” he said. “A nonvenomous snake will try to leave. A venomous snake is more aggressive and is more likely to set up in a defensive position to attack. Either way, the best thing to do is to stay away.”
The session also touched briefly on poisonous plants like poison ivy.
“A good rule to remember is ‘Leaves of three, let it be’,” Wells said.
He said poison ivy was frequently confused with other vines and plants. He said it was important to remember that poison ivy was not a stand alone-plant and needed a host plant to attach to in order to survive.
“If you don’t know what it is, whether a plant or an animal, stay away from it,” he said.
But not all animals found in the woods are a danger.
Wells showed visitors an array of animal pelts, and a few animal skulls, from animals that are common here. The animals were all killed in an accident or their skins were donated for the exhibit.
“There are far more mammals here than this,” Wells said.
Some of the skins that were on display included the red fox, grey fox, coyote, raccoon, skunk, opossum and deer.
Wells explained that animal populations fluctuate over the years, depending on whether there has been a surge in predator or prey animals.
“Nature takes care of things like that,” he said.
For example, the black bear population in the region is rebounding after having experienced a decline.
“They are native, but their population is growing,” Wells said.
He noted some species, like coyotes, were cause for concern with the increasing population.
“They can grow to be larger animals,” he said. “When they are in a pack, they are more aggressive and are more dangerous.”
In the smaller animals, Wells noted there were many species of rats and shews to be found. He also said that armadillos are starting to be an invasive animal in Tennessee.

The Elizabethton School System is proving to be “the popular kid.” That means more students – and more positions. The... read more