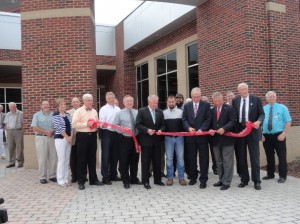 The new 95,000 square-foot, $16 million addition at the Tennessee College of Applied Technology in Elizabethton was officially opened with a ribbon-cutting ceremony Friday morning.
The addition brings all the school’s classrooms and training programs together at 426 Highway 91 in Stoney Creek. Construction on the project began on Aug. 20, 2012.
TCAT Director Dean Blevins said the completion of the addition was a major achievement in the school’s history.
“It certainly is fitting that we are celebrating this milestone as we are approaching our 50th anniversary,” Blevins said.
The school’s 50th anniversary will be celebrated next year in 2015.
Blevins said during that time the school has trained thousands of students for their career fields. He noted the school had a 90 percent completion rate for students, a 90 percent placement rate and a 92 percent pass or certification rate.
Tennessee Board of Regents Chancellor James King agreed it was a historic time for the school. He remarked that in the past 30 years, colleges of applied technology in Tennessee had gone by three different names and had been governed by two different institutions, the state Department of Education and now the TBR.
King said the completion of the addition was a part of the state master plan for the state’s colleges of applied technology.
“The completion of this is the last step in the master plan that was developed in 1995,” King said. “This is a great facility for the area. A center like this helps with economic and community development.”
Businesses that were thinking of locating in Carter County should be brought to TCAT, King said, to show that the county has the necessary tools in place to support the new company.
“It is these schools that supply the workforce,” he added. “Marketable skills are so important in today’s economy. Having a degree for a degree’s sake is not as important as having a marketable skill.”
He noted the expansion would also help host the increasing number of students who will likely be attending the school because of the new Tennessee Promise and the Drive to 55 programs. Tennessee Promise provides two years of free college or technical school to graduating high school students. Drive to 55 has a goal of having 55 percent of Tennessee residents with a college degree or certification.
King also recognized state Rep. Kent Williams for working to secure funding for the $16 million expansion.
The consolidation was done to bring all of the classes at old Herman Robinson Campus on Arney Hill together with the classes being taught on the main campus.
Blevins said the consolidation replaces 30,000 square feet of training space at the Herman Robinson Campus, which is now being considered for a joint vocational center operated by the Carter County and the Elizabethton City school systems. The four buildings are the Administration Building, the Allied Health Building, the Transportation Building and the Skills Building.
The Administration Building houses administration offices, student services, bookstore, financial services, tech foundations and classrooms and shop areas for administrative office technology, computer information technology and electricity and electronics.
The Allied Health Building houses practical nursing, certified nurse aide and industry training lab and classrooms while the Transportation Building houses diesel powered equipment and automotive technology. The Skills Building training space for millwright skills, heating and air conditioning skills, welding skills, and pipefitting and plumbing skills.