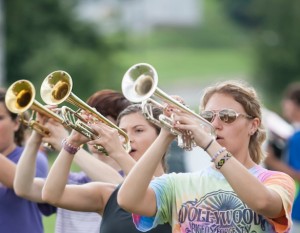 Last year, the Elizabethton High School ’Betsy Band marched to the state championship with a show celebrating its hometown.
This year, the band hopes to bring home another state title by celebrating and honoring the nation’s veterans who lost their lives in the Vietnam War.
The 140-plus members of the ’Betsy Band recently spent a week in band camp learning all the steps to go with their new show, “To Build A Wall,” which Band Director Perry Elliott described as a celebration of the Vietnam War Memorial.
“When I am thinking about ideas for our show, I try to think of things that are uplifting and inspiring,” Elliott said. “I don’t want to have a negative show. I want the students to learn something from the show and for the crowd to be inspired after watching it.”
Elliott said he thought back to Vietnam, which was the focus of intense debate as it was being fought. After the war, the idea to build a memorial to those who had died was met with animosity and at that time, any permanent tribute to the war would have been regarded as a “scar on the landscape.”
But that has changed.
“It has become a pilgrimage for Vietnam veterans and has been called ‘the Wall that heals’,” Elliott said.
He noted there would be no controversy about Vietnam included in the show.
“This is simply and purely a celebration of what it took for our men and women to get on that wall,” he said. “This is about their sacrifice.”
The show will feature four songs, each telling a different part of the story. The first part of the show will tell about walls. Elliott said there would be no mention of Vietnam at this point, just about how walls can keep things in or block them out.
The second song will reveal there is one special wall that has been called a “healing wall.” The third song tells about the sacrifice of the soldiers, and the fourth will be a celebratory song.
The students will also wear a memorial to former EHS students who were killed in Vietnam, and band members’ T-shirts will feature the names of former EHS students lost in that war.
So far, he said, the students have enjoyed learning the new show.
“When I explained the show to them, they were a little bumfuzzled,” Elliott said. “For them, Vietnam is ancient history. As we have gotten into it, I think they are really enjoying the show and the music.”
To get the most of the week-long band camp, extra staff members and instructors were brought in to help the students. Most of that extra assistance came from EHS band alumni.
“They are working in their special areas of expertise,” Elliott said. “They have other careers and have went on to do other things, but they come back to help out. We have a pretty good-size staff on hand and everything has been going good. We are looking forward to a spectacular season.”
During the camp, band members learn the basics of the routine they will be performing throughout the year, which they will build on during other regular practice sessions.
The ’Betsy Band will participate in four competitions this year. They will take part in Bristol’s Music in the Castle on Oct. 4, the Admiral Cup in Knoxville on Oct. 18 and the Hilltopper Invitational in Johnson City on Oct. 25. They will also travel to the Nashville area to be a part of the Tennessee Division II state championship on Nov. 1.
The ’Betsy Band will be the defending state champions.
“I am pleased with all we did last year,” Elliott said. “Our goals for this year, is as always, to make the city of Elizabethton proud. I want for us to perform the music and do it to the best we can do and be proud of the effort. Trophies come and go, but the pride of being a part of something larger then yourself stays.”
Elliott said he was not preparing for the state competition any differently than he had in the past. The band has won the state title for three of the past four years.
He said he did notice students were taking practices more seriously.
“The students are doing things differently,” he said. “The students want to continue the tradition of excellence. They show up early for practice so they can get in extra practice on their own. There is definitely an expectation of excellence among the students.”
The band is funded solely through the efforts of the Band Boosters and community residents. The boosters hold various fundraisers for the band and help provide for special needs the band may have.
“We are looking forward to the fall football season,” Elliott said. “We love to support the football team. There is nothing like the excitement of Friday night.”

Being better than the best. That’s the goal of the Elizabethton City School system’s faculty and staff in the coming... read more