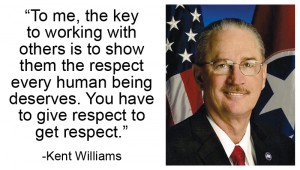 Cooperation and an ability to work well with others are important qualifications for a county mayor, according to candidate Kent Williams.
Those qualities, he said, have been missing in the relationship between the county mayor and the county commission for the past few years.
“They really don’t have a relationship,” said Williams, who is an independent candidate for county mayor in the general election on Thursday. “It has basically for four years been infighting between the mayor, the commission and the office holders.”
While a debate can be a good thing, Williams said, bickering accomplishes nothing.
“We have to learn it’s not about fighting once a month at the courthouse, and that is what it has been for four years,” he said. “It should be a good working relationship.”
“If you do have personality conflicts you should be able to set those to the side and work together,” he added.
In light of the relationship between the office of mayor and the elected officials of the County Commission, Williams, a three-term state representative, touts his “ability to work with others” as an asset that will help him if elected mayor.
“To me, the key to working with others is to show them the respect every human being deserves,” he said. “You have to give respect to get respect. You cannot demand respect, it is something that has to be earned.”
“Even with all the turmoil of becoming Speaker of the House within three months I had earned the respect of all my Republican colleagues,” he added, referencing the controversy surrounding his attaining the post, which led to his ouster from the state Republican party.
Williams said the roll of a county mayor within the county government is one of “leadership and guidance” and the mayor’s job is to work with all of the other elected officials, the City of Elizabethton and with economic development. He added the mayor has a duty to recruit business and industry into the county.
“That would be my main focus as mayor,” he said. “The main issue is creating jobs. That is the answer to our financial problems – creating industry, creating tourism.”
Williams said his business experience – as a local small business owner and previously in management for a multi-million dollar company – combined with his experience as a state legislator will be an asset to him if elected mayor. He cited his experience in the private sector where he was in a managerial position responsible for budgets, hiring of employees and training as well as his service on the Tennessee House of Representative’s Finance Committee and as Speaker of the House.
“I’ve done a $30 billion budget as Speaker of the House,” he said.
Williams said he plans to bring that budget experience to the office of Mayor.
“The mayor should be able to sit down with the department heads and go over their budget line-by-line and make suggestions – that is really all the mayor can do is make suggestions,” he said. “As mayor I would sit down with all the departments and I would present my own (county) budget to the commission after I sat down with the office holders.”
On the issue of education, Williams said the children of Carter County deserve the same opportunities as other children in the state.
“I think we do need to have a long-term plan, but I agree with Dr. (Kevin) Ward (director of schools) that even if you have a long-term plan you can’t do it all at one time,” Williams said. “We have to do it a piece at a time. We have to break that plan down and say ‘what can we afford to do now?’”

Recruiting, revenue & relationships: Incumbent says operation must be run like a business

A mayor should help bring revenue into the county and see that the county’s operations are run like a... read more