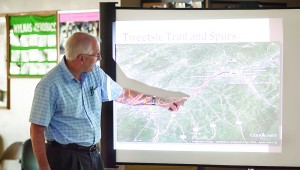 Photo by Brandon Hicks
Ken Gough, a member of the Tweetsie Trail Task Force, describes the trail during a presentation Wednesday at the Elizabethton Senior Citizens Center.

The opening day of the Tweetsie Trail is drawing closer, but that won’t be the end of the line for the walking and biking trail.
Tweetsie Trail Task Force member Ken Gough updated members of the Elizabethton Senior Citizens Center on the trail Wednesday morning, telling the group about future sections of the trail and possible use expansions for the path.
Gough said the trail has largely been developed with little contention, except for one area – whether horses would be allowed.
Gough, who supports having horses on the trail, said the task force recently approved a set of rules prohibiting them.
Those rules will be up for a vote by the Johnson City Commission tonight.
Gough explained the exclusion of horses ran contrary to original expectations and that some pre-opening day damage caused a change in plans.
“A day or two after the crusher run (the trail surface) was put down, someone took a horse on the trail,” Gough said. “The surface was still soft and the hooves dug deep divots in the trail. It was nothing terrible, but it did do significant damage though. It was very irresponsible of whoever did that and it provided ammunition for those who said horses can’t be on the trail.”
Gough said, as an advocate of allowing horses on the trail, he would like to see them allowed for a short period to see what happens. He said if horses are ever allowed, it would be in the rural section only, from Lions Field to the train trestle bridge over U.S. Highway 321.
There were three arguments against having horses on the trail, he said, arguments which he believes can work themselves out if the animals are allowed.
The first objection concerns possible damage to the trail, which Gough said would be minimal after the surface had time to harden and set.
The second issue deals with the safety of pedestrians and horses together. Gough referenced the Virginia Creeper Trail, which does allow horses and where he said there are no problems with the two using the trail together.
The concern of having horse droppings on the trail surface is the third issue.
“That is what horses do,” Gough said. “In a rural area, I don’t think that would be a concern. That is why they would not be allowed in the urban areas.”
He said that while the first draft of rules did not allow horses, it was not a completely decided issue and that it could change in the future.
Gough also discussed the future sections of the trail. The first phase of the Tweetsie Trail stretches from Johnson City to Sycamore Shoals but will extend to Holly Lane, which adds around a mile to the trail.
The second phase will take the trail from Holly Lane through downtown Elizabethton, while the third phase will go from downtown to the area near Snap-On Tools.
Gough said no dates have been set for those phases yet, explaining there are a few “technical problems” that had to be worked out with the second phase before work could start. The cities of Elizabethton and Johnson City are still working to develop the best plan for the third phase, he added.
“The decision was made to focus on the first phase,” he said. “The idea was that ‘if we build it they will come,’ and people will see how good it is and the other sections will follow. That is proving to be true.”
Gough said that when the second and third phases are started, more donations will be needed. He noted that the first phase of the trail has been completed using no state or federal funds, relying heavily on donations and contributions from local residents.
Gough described the trail as a “far-sighted investment” for the city and said the trail would offer safe, accessible exercise and activity opportunities, as well as increase the quality of life and tourism opportunities.
“I think our descendants will thank us for preserving this part of our history,” he added.

Machines signed, sealed and ready to be delivered to polling places

Polls across Carter County will open up Thursday morning for Election Day and officials are working hard to make sure... read more