Round 2: Lunceford tops Mathes for sheriff 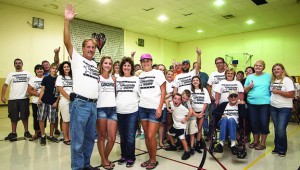 Republican nominee Dexter Lunceford defeated challenger Chris Mathes for a second time this year for the post of Carter County sheriff.
Lunceford garnered a total of 6,994 votes, or 54.27 percent, Thursday night with 5,416 write-in votes, or 42.03 percent.
A total of 490 votes were cast for James Parrish, who previously withdrew from the race but whose name still appeared on the ballot.
Lunceford said he is pleased with his victory in the general election and feels the votes affirmed his victory in the primary election.
“The people of Carter County have spoken again, this time with a much larger margin,” he said.
In the May primary election, Mathes, who is the current sheriff, lost out to Lunceford by a margin of only 78 votes. Shortly after the primary, Mathes announced he was running a write-in campaign against Lunceford to attempt to retain his position as sheriff.
Lunceford said his first order of business will be to begin putting his administrative team together to assist him in the running of the department.
“I look forward to giving the people of Carter County the best Sheriff’s Department I can,” he said.
In the primary election, Mathes carried seven precincts – Central, Range, Courthouse, Happy Valley, Westside, Harold McCormick, High School. In the election Thursday, only two precincts – the High School precinct and Mathes’ home precinct of Central – reported more write-in votes than votes for Lunceford.
“Carter County voters wanted to go another direction and they chose Dexter Lunceford in the 2014 Sheriff’s election,” Mathes said. “I would like to thank God, my family and all of my many friends and constituents for all of their prayers and continued support.”
“I sincerely appreciate all of you for the last eight years as sheriff and it has been a great honor,” he added. “I am very proud of those eight years and the great men and women who serve there today.”