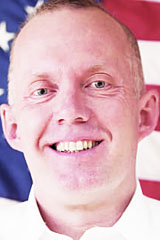 A familiar face is returning to the post of chief deputy at the Carter County Sheriff’s Department as sheriff-elect Dexter Lunceford has named James Parrish to the position.
Parrish, a retired Army lieutenant colonel, previously served as the department’s chief deputy under former sheriff John Henson. He also served as the department’s jail administrator under a previous administration.
During his previous tenure as chief deputy, Parrish oversaw the day-to-day operations of the department as well as the department’s budget and expenses.
Lunceford said he is looking forward to working with Parrish.
“We will complement each other well and we will work together to give the people of Carter County the best sheriff’s department possible,” Lunceford said.
Parrish was previously an independent candidate for the office of sheriff in the Carter County general election this year but withdrew from the race on May 23. Parrish’s announcement to withdraw from the race followed the announcement of a write-in campaign by current Sheriff Chris Mathes, who had lost the Republican primary election to Lunceford.
The appointment of the chief deputy was the first staffing announcement made by the sheriff-elect. Lunceford said other key administrative positions will be filled – and other staffing decisions made – after he takes office.
Lunceford said he will complete a staffing analysis for the department for both the patrol and corrections divisions. He said he plans to evaluate the department’s current employees in order to determine their strengths.
“I will place people in the positions I think they will do the greatest good,” he said during an interview earlier this month with the Elizabethton Star. Lunceford said the staffing study will also allow him to evaluate the number of supervisory positions versus the number of positions they supervise.
During his campaign, Lunceford said if elected he would reopen partnerships with other area agencies and reinstate programs which had been cut such as the Drug Abuse Resistance Education – or DARE – program in the school system as well as the Drug Task Force and the Drug Enforcement Adminstration’s local Task Force. The sheriff-elect said he will reinstate those programs by reassigning existing department personnel.