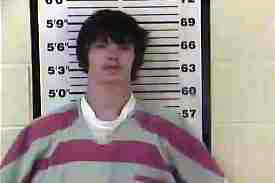 A driver who police say led them on a high-speed chase through parts of the city and the county on Monday was arrested on charges stemming from that event on Tuesday.
Thomas Eugene Elliott, 20, 106 Reene Drive, Johnson City, was arrested on warrants from the Carter County Sheriff’s Department charging him with evading arrest and violation of probation, and from the Elizabethton Police Department charging him with evading arrest by motor vehicle, reckless driving and driving on a suspended license first offense.
EPD Officer Jordan Ensor said in his report that the incident started shortly after 2 p.m. Monday when he saw a white Honda Accord being driven at a high rate of speed on Highway 67 near Buck Van Huss Road.
Ensor wrote he clocked the car traveling 76 mph in a 45 mph zone. He tried to stop the car, but it turned onto Ward Street, accelerated and kept going. From there the Honda turned onto West G Street, where, according to Ensor, the car accelerated again.
Because of the car’s speed, Ensor shut off his emergency lights for public safety. He said he saw the car passing vehicles on the wrong side of the road. The Honda then turned onto Parkway Boulevard, and then Southside Road, where police lost contact with the car.
Witnesses spotted the car again on U.S. Highway 19E and told police. EPD Officer Matt Sexton found the car at a traffic light at U.S. Highway 19E and East Elk Avenue.
“Ptl. Sexton pulled out in front of traffic that was stopped for a red traffic signal and activated his blue lights,” Ensor wrote. When Sexton got out of his vehicle, according to the report, the Honda then drove around several vehicles and “again fled from officers.”
CCSD Sgt. Brian Durham then pursued the Honda on Broad Street Extension.
Deputy David Caldwell wrote the warrant for the CCSD and noted the car “proceeded up Broad Street Extension at an extremely high rate of speed.”
Caldwell was at the intersection of Broad Street Extension and Highway 91 to deploy spike strips to stop the Honda, but was unable to because of other traffic in the area.
Caldwell was waiting for the vehicle at the Hunter Bridge, where he ordered Elliott to stop his car. He drew his pistol and approached the car.
In response to Caldwell’s order to stop, he wrote in his report that Elliott was “looking at me, and responded saying ‘I am’ and I reached for the driver’s side door. At this time, Thomas Elliott punched the gas, almost hitting me and went north on Highway 91.”
Caldwell followed Elliott on Highway 91 but was forced to discontinue his pursuit due to heavy traffic conditions.
Officers ran the license plate on the car and the registration came back to Elliott.
Caldwell served the CCSD warrants for Elliott’s arrest to Elliott on Tuesday morning at 102 Emily Drive in Elizabethton.
He was arrested without incident and transported to the Carter County Detention Center. He was also charged with the additional warrants from the EPD.

‘Showing off’ gets EPD’s attention and charges

A county motorcyclist is facing multiple charges after he drew the attention of police who said he told them he... read more