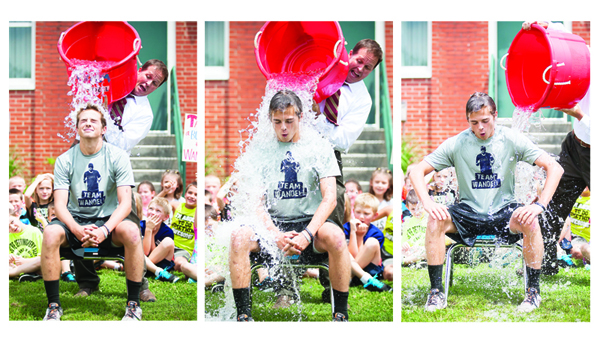 It’s a cool way to raise awareness about a disease.
No, not a cool way. A cold way.
As in icewater cold.
Elizabethton High School senior Connor Brown took a bucket of ice for Team Wandell Wednesday afternoon in a bid to raise awareness about amyotrophic lateral sclerosis, also known as ALS or Lou Gehrig’s disease.
He took the Ice Bucket Challenge – a viral movement focused on ALS – and challenged several sports teams from EHS to do the same.
Brown was doused in honor of East Side Elementary Principal Josh Wandell, who was diagnosed with ALS last year.
“I saw where a lot of people were doing the Ice Bucket Challenge,” Brown said. “I know the story about Josh and I wanted to bring it here. Hopefully, this will bring ALS to the forefront and more people will get involved.”
Wandell said it was humbling to have Brown participate in the challenge for Team Wandell, which is what his supporters have dubbed themselves.
“Conner has been around since the start,” Wandell said. “It is not surprising that he is doing this. What I want to do is spread the word in the community and as far as I can so everyone knows what ALS is and what it does to you.”
Conner took the challenge outside East Side Elementary, with the song “Ice Ice Baby” playing in the background and several classes from the school looking on.
“I am taking the challenge, and I am challenging the EHS football, basketball, baseball and cheerleading teams to do the same,” Brown said.
With that declaration, T.J Brown, East Side librarian – and Connor’s father – hefted a large red bucket filled with ice water and dumped it over his son’s head.
T.J. Brown said he hoped the Ice Bucket Challenge would catch on in Elizabethton.
“Who knows how long it will last?” T.J. Brown said of the Internet phenomenon. “Who can tell? We should jump on it now while everyone is still talking about it, and get it out there.”
The Ice Bucket Challenge started in Massachusetts with former Boston College baseball player Pete Frates, who was diagnosed with ALS in 2012. ALS is a progressive neurodegenerative disease that affects nerve cells in the brain and spinal cord, leading to muscle weakness, loss of the use of arms and legs and difficulty speaking, breathing and swallowing.
Frates, who can no longer speak, posted his own ice bucket challenge video to the tune of Vanilla Ice’s “Ice, Ice Baby” and dared a few people to try it. The result was that the challenge spread through social media and across the country.
Participants post videos of their own ice bucket challenge to social media sites and challenge others to keep the chain going. Those who accept the challenge will then post their own videos of themselves participating and challenge others to do it.
Those who don’t accept the challenge are asked to donate to ALS research or to the charity of their choosing.

It’s time to play ball, have a party in the park and pick up some Elizabethton history, to boot. The... read more