14 commissioners, 230 years experience and one farewell 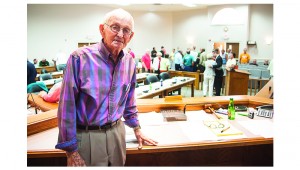 Photo by Brandon Hicks
Commissioner Charlie Bayless, who is retiring at the end of this month, has a total of 54 years of service with the Carter County Commission.

Thursday evening marked a farewell to more than 230 combined years of experience as 14 members of the Carter County Commission cast their final votes as representatives for their districts.
More than half of the 24-member body will not return next month.
Of the 14 commissioners who are not returning, 13 decided not to seek another term to the county’s governing body and one was defeated in the county’s general election earlier this month.
Among those leaving are several who have dedicated many years in service to their fellow residents.
Commissioner Charlie Bayless, affectionately referred to as “Coach” by many who know him, has served on the Carter County Commission for 54 years. He was first elected to the governing body in 1954. Since being elected, Bayless has only been absent from the commission for six years, when he took a break from the county position to seek election to the state legislature.
“I’ve been here a long time. I’ve probably been here too long,” Bayless said as he laughed during his final speech to his fellow commissioners. Bayless said he wanted to thank all of the office holders he has worked with over the more than half-century he has served, and he also wanted to thank his constituents who have voted for him for so many years.
“Somebody asked me the other day ‘Why didn’t you run? Was it because of your age?’” Bayless said. “I said no, it’s because all of my people are dead.” The commission chamber erupted with laughter and applause.
Close behind Bayless in experience is Commissioner Bill Armstrong, who has served on the commission for the past 46 years.
Other members with long tenures of service are Richard Winters, Harry Sisk and Lawrence Hodge.
Winters has served as a commissioner for 28 years. Before that, he served for 12 years on the Carter County Board of Education. Sisk has been a member of the commission for 24 years and prior to that, he served on the Board of Education for 8 years. Hodge has a combined 20 years service to the commission over three different tenures.
The commissioners not returning after Sept. 1 are Hodge, 1st District; Joel Street and Winters, 2nd District; Sisk, 3rd District; Steve Lowrance and commission chairman Tom “Yogi” Bowers, 4th District; Bayless and JoAnn Blankenship, 5th District; Ken Arney and Steve Chambers, 6th District; Russell Kyte and Scott Sams, 7th District; and Armstrong and Pat Hicks, 8th District.
Each of the county’s eight districts will see at least one new face on the commission after Sept. 1, but each district also has at least one returning representative.