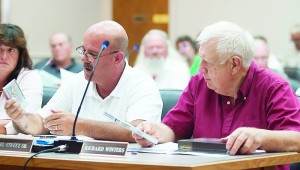 Commissioners Joel Street, left, and Richard Winters look over product samples from STL Distribution. The Commission approved a 5-year tax abatement plan for STL Distribution on a vote of 22-1.

In the last meeting for the majority of the commissioners, the Carter County Commission chose a new county attorney and approved a 5-year tax abatement plan for a local company.
Even before the commissioners began the selection process, Commissioner John Lewis stood and made a motion to table the resolution to elect a new county attorney for one month so the new commissioners who will come on board in September would be allowed a say.
The motion received a second from Commissioner Nancy Brown, but failed on a 16-7 vote.
After the failed attempt to postpone the selection, Commission Chairman Tom “Yogi” Bowers opened the floor for nominations to the position. Three local attorneys had applied for the position and prior to the meeting, members of the commission were supplied with copies of their applications.
Commissioner Buford Peters nominated Joshua Hardin, Lewis made a nomination for Jerome Cochran and Commissioner Ronnie Trivett nominated Travis Holly.
Each was then allowed to address the commission.
Hardin, a Carter County native from the Stoney Creek community, cited his experience not only as an attorney butas a law enforcement officer. He said before earning his law degree he served as a corrections officer for the Washington County Sheriff’s Office and also as a police officer with the Kingsport Police Department. He is also a partner in the law firm founded by current County Attorney Keith Bowers, who will assume the post of General Sessions Judge Sept. 1.
“I feel I can provide an effective and smooth transition to the county,” Hardin said, touting his work experience in assisting Bowers with the county’s legal process.
Cochran, who has been practicing law in Carter County for 14 years, cited his previous experience as a state legislator, which he said would be a benefit to the county if he were to be selected as county attorney. Cochran served four years in the Tennessee House of Representatives as the representative for the 3rd District.
“I know the process in Nashville,” Cochran said. “I know who to contact if you need a red light put in.”
Travis Holly cited his family ties in Carter County and his previous experience doing government work representing the legal interests of Jefferson County, Ala. He said he grew up in Carter County and he is raising his family here.
“I have a vested interest in Carter County now and in the future for my family,” he said. 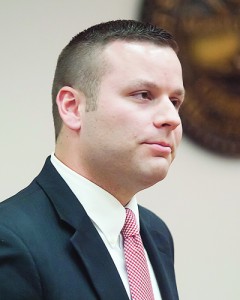 Joshua Hardin was selected as the new County Attorney. He will replace current County Attorney Keith Bowers, who is leaving the position after being elected as General Sessions Court Judge.

Hardin was selected as the new county attorney with 14 votes.
Cochran gathered eight votes and Holly received one vote.
In a near-unanimous vote, the Commission voted to approve a 5-year tax abatement for Send The Light Distribution as a means for the business to retain jobs and possibly expand in the future. The move by the commission is also an incentive to encourage the company to purchase the building it is currently operating out of – the old Frank Shaffer building on Highway 91.
Glen Bailey, one of the owners of STL Distribution, addressed the commission and also distributed samples of some of the products carried by his company. He said his company sells and distributes Bibles and other Christian materials.
“We are the world’s leading distributor of Bibles,” Bailey said. “The largest distributor of Bibles in the world is right here in Carter County.”
STL Distribution moved its operations to Carter County from its previous location in Johnson City approximately 5 years ago. Bailey said the company currently has about 100 employees and he hopes to expand in the future.
The commission voted 22-1 to approve the 5-year tax abatement, with Lewis casting the only dissenting vote.
In other business, the commission approved a resolution which would allow the Highway Department perform paving work for the Carter County school system at cost. Attorney Keith Bowers said this would allow the school system to save money by not having to contract out the work. He said the projects would be looked at on a case-by-case basis and would require the approval of the road superintendent and the full commission.
Commissioner Joel Street, who chairs the landfill committee, presented a request to the full commission for $20,000 to be allocated from the fund balance for the landfill to complete the convenience center at Elk Mills. The request from the landfill committee was presented to the budget committee earlier this week and that committee tabled the request.
The commission voted 14-9 to table the request until the new commissioners come on board.