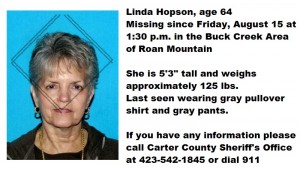 Emergency crews are searching for a Roan Mountain woman who has been missing since Friday afternoon.

Carter County Sheriff Chris Mathes said the family of Linda Hopson, of 212 Buck Creek Road, Roan Mountain, reported her missing shortly after 4 p.m. on Friday. He said Hopson was last seen at approximately 1:30 p.m. on Friday when she told her husband she was going out for a walk.

“Although foul play has not been ruled out, information obtained during the investigation by the Carter County Sheriff’s Office indicates that Linda Hopson left her residence on foot and was going for a walk but never returned,” Mathes said.

Officers of the Sheriff’s Department along with emergency rescue personnel from the Carter County Rescue Squad and numerous community volunteers searched the Buck Creek and Roan Mountain area until after 11 p.m., Mathes said, when the search was halted for safety concerns. The search resumed Saturday morning with the use of police K-9s as well as the Tennessee Highway Patrol rescue helicopter using the FLIR Infrared Camera System, Mathes said.

“It is suspected that Mrs. Hopson may be suffering from a medical condition and could be disoriented in some way,” Mathes said.

Hopson is a white 64-year-old female and is also a nurse. She is described as 5’3” tall and weighing approximately 125 pounds. She has brown eyes and her hair is a mix of brown and gray. She was last seen wearing a gray pullover shirt and gray pants.

Anyone with any information about the missing person is encouraged to contact the Carter County Sheriff’s Department at 423-542-1845 or dial 911.

A corrections officer at the Carter County Detention Center has been fired amid an investigation into a report that an... read more