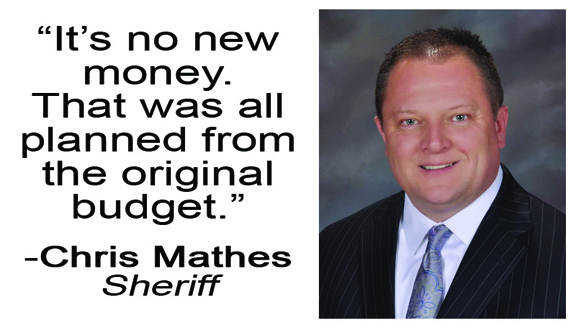 Pay raises recently handed out to employees of the Carter County Sheriff’s Department have drawn questions, but current Sheriff Chris Mathes said the increases were already planned for with the current budget.
The Elizabethton Star was contacted by residents who had heard about the pay increases and questioned the timing, since Mathes is preparing to turn the office over to Sheriff-elect Dexter Lunceford.
On Friday, the Star obtained copies of the payroll registers of the Sheriff’s Department – which are public record – for the period of July 18 through Aug. 15 from the Carter County Finance Department
Since Aug. 1, 51 employees of the Sheriff’s Department received pay increases. Of those, five employees received two increases, one on Aug. 1 and one on Aug. 15. A total of 42 raises were implemented on the Aug. 1 payroll and 14 were implemented on the Aug. 15 payroll.
The raises implemented by Mathes increased the salaries for the affected employees in range of $520 per year to $3,640 per year. The total amount the annual salaries increased by is $80,600.
“It’s no new money,” Mathes said. “That was all planned from the original budget.”
According to Mathes, part of the plan involved the retirement of Chief Deputy Ron Street.
“My plan was to not have a chief deputy but to allow the captains to run the divisions,” he said, adding that by not filling the chief deputy position he could take the money set aside in the budget for that salary and divide it up to give raises to employees.
Mathes said the raises for employees are part of an effort to reward “deserving employees” and to improve employee retention rates.
He said he has periodically given raises throughout his tenure as a means of employee retention.
“No one said anything about raises I gave six months ago or even the raises I gave three months ago,” he said.
The current sheriff said the raises will not affect the department’s budget for the remainder of his time in office but he is not sure how it will affect the budget when Lunceford takes office, since Lunceford has announced his decision to fill the chief deputy position.
Mathes said the raises had been part of his plan to implement before Sept. 1. He said other raises had also been planned, but those increases are now on hold. Mathes said any future decisions on employee pay will be made by Lunceford.
With the exception of disciplinary matters or dismissal proceedings, Mathes said he has completed all of the staffing decisions he is going to make during his tenure.

Emergency crews are searching for a Roan Mountain woman who has been missing since Friday afternoon. Carter County Sheriff Chris... read more