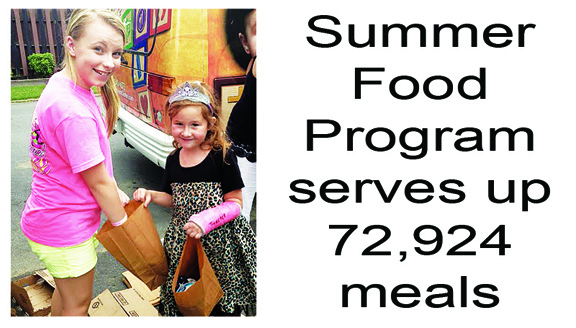 Program volunteer Cloe Winters, left, places items into a child’s lunch bag during a stop with the Summer Food Program. This was the third year Winters, age 10, volunteered with the program.

One local community service agency is proving that every little bit helps make a difference, one bite at a time.
In this instance, that difference was serving nearly 73,000 meals to children.
The TLC Community Center recently completed its Summer Food Program with record numbers. Between June 2 and Aug. 8, the center served 72,924 meals to children in the community. When the program began in June, the center was serving an average of 325 children per day, but as the program drew close to the end, that number rose to an average of 423 per day.
This was the center’s 11th summer food program, and TLC Community Center Director Angie Odom said the program has grown each year.
But this year?
This year saw an exceptionally large increase. Last year, the program served 48,960 meals throughout the summer, with an average of 320 children served per day.
“We added sites this year, but each site we already served had so many extra kids that came,” Odom said.
The Summer Food Program provides a hot dinner meal and a bagged breakfast and bagged lunch to children throughout the community every Monday through Friday during the program period; the meals are delivered to several sites throughout Carter County.
“We started our Summer Food Program in response to a need that we saw in our community,” Odom said, adding through the center’s work within the school system she spoke to several children who said they do not get enough to eat during the summer.
“During the school year, many of these children receive the bulk of their nutritional needs from the school meal program, ” Odom said. “During the summer, those meals aren’t available to them.”
This year, while volunteers were delivering food throughout the community they saw another need – many of the children were barefoot when they came to pick up their food.
“They would stand on the hot pavement hopping up and down or were walking on hot gravel,” Odom said. “We saw the need and wanted to help.”
Odom called on the programs volunteers and supporters, who came through and bought a pair of flip-flops for each child served by the route so they would have shoes to wear.
One of the things that makes the accomplishment of this program so amazing, Odom said, is that the program is funded entirely through donations and volunteers.
“We don’t have one money supplier,” she said. “It’s $20 here or $50 there and another $10 here that makes this happen.”
She said dedicated volunteers are also an essential part of the program and many worked hard throughout the summer.
But she singled out one very special volunteer – Cloe Winters.
This was the third year Cloe has volunteered with the Summer Food Program. While this may not sound out of the ordinary, her age is what makes her service to the program stand out. She is 10, and has been volunteering with the Center since she was 7.
The TLC Community Center is a non-profit agency that receives no state or federal funding for its programs. Odom said every program offered by the Center – including the Summer Food Program – is funded strictly through donations by local residents, businesses, churches or civic groups.
Odom wanted to give special thanks to local groups who helped support the program with donations or through volunteering. She said the following groups and businesses partnered with the center to help make the Summer Food Program a success: Doe River Gorge, Elizabethton Alliance Church, ECHO Home School Co-Op, Valley Forge Freewill Baptist youth group, St. Elizabeth Catholic Church, Appalachian Christian Camp, Central Community Christian Church, Beck Mountain Baptist, Carter Christian Church, Sunnyside Baptist Church, Pine Ridge Care Center, McDonald’s, Little Caesar’s and Roan Mountain Holiness Church.

A Journey of Hope

Angie and Earl Odom and their daughter Hope walk into the Florida hospital where Hope was born. Every journey begins... read more