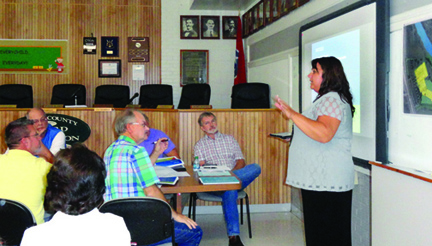 Photo by Abby Morris-Frye
Director of Federal Programs and Testing Dr. Jeri Beth Nave, standing, gave members of the Carter County Board of Education a preview of annual progress test results during a workshop Monday. The official results are slated to be released by the state’s Department of Education today.

Student progress reports are being released today by the state, but members of the Carter County Board of Education got a sneak preview during a Monday afternoon workshop.
Jeri Beth Nave, director of federal programs and testing, told members of the board the results of student achievement testing for the 2013-2014 school year would not be officially released by the state until today, so she could not discuss them in detail, but she could provide some insight on the results.
“We’ve had preliminary results since the end of the school year and bits and pieces have been coming in throughout the summer,” Nave said. “It was a very difficult year. We had so many initiatives from the county and from the state.
“Our end result has been positive,” she added. “We saw some really great things across the district.”
Nave said each school is evaluated based on Annual Measurable Objectives – also called AMOs – and 13 of Carter County’s 14 schools were able to meet “the majority of the AMOs” for the 2013-14 school year.
According to Nave, the school system saw increases in achievement proficiency as well as value -added growth rate, which measures progress made by students from year to year.
System-wide improvement was seen in the “overall” category of value-added growth, which incorporates all four areas of measured testing – Reading/Language Arts, Math, Science and Social Studies.
“When you look at that over a three-year period our growth rate is a 5 and that is the highest,” Nave said.
According to Nave, preliminary reports on the test results indicate there is still room for improvement.
“Our district has been named a district in need of improvement for our sub-groups,” Naves said, adding those sub-groups included students with disabilities and economically disadvantaged students. She said the system will need to look at ways to close the achievement gap for those groups of students.
Since receiving the preliminary results in May, Nave said the school system has already been developing strategies and working on ways to focus on areas which the results indicate need improvement.
Director of Schools Kevin Ward told members of the board improving student achievement scores is something the school system focuses on each year.
“School improvement is not a one-year process, it is not a two-year process,” Ward said. “It is an ongoing process.”
He said continued progress requires that each year the system evaluate its strengths and weaknesses and begin onto improve upon the weak areas, while making sure the areas that showed strength do not fall behind.
Members of the Board also heard an update on the telemedicine system, which was previously approved for use in the county schools. Sonya Miller, nursing supervisor for the school system, informed the board the terminals for the nursing offices are scheduled for installation the week after Labor Day.
Miller reported Integrated Care Partners – the company partnering with the school system for the telemedicine system – is in the process of hiring the nurse practitioner for the program.

By Brian Reese editor in chief brian.reese@elizabethton.com You could call it No. 1 book No. 2. Mark A. Stevens and... read more