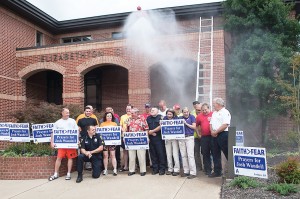 The Ice Bucket Challenge continues in Elizabethton.
But there weren’t really any ice buckets. So perhaps that should read: The Fire Hose Challenge has begun in Elizabethton.
City of Elizabethton, Elizabethton Police Department and Elizabethton Fire Department employees answered the viral Ice Bucket Challenge Monday afternoon. But instead of taking the traditional route of using icewater-filled buckets, they added a twist of their own by using a brush truck with an icewater-filled tank and a fire hose to soak the challenge accepters.
The Ice Bucket Challenge is a way to raise awareness for amyotrophic lateral sclerosis, also known as ALS or Lou Gehrig’s disease.
This round of the challenge started when EPD Maj. Shannon Peters personally challenged EPD Chief Greg Workman to accept. Workman took the challenge one step further by including more police officers, firefighters and other city employees. “We decided to extend it to other city employees,” Workman said. “I received the challenge on an individual level, but we extended it to the municipal level. We want to get the awareness out there about ALS and promote the Wandell walk/run race that is coming up.”
The annual Wandell Walk/Run 5K race will be held Sept. 20 in honor of East Side Elementary Principal Josh Wandell, who was diagnosed with ALS last year.
“This is a good time to get the word out,” Workman said.
City Manager Jerome Kitchens was one of those accepting the challenge.
“ALS is a terrible disease,” Kitchens said. “We have a local person who has been affected by the disease. We want to raise awareness for this disease, and raise donations for research towards a cure.”
City employees were joined by some of the City Council members for the challenge. Mayor Curt Alexander and council member Bob Cable joined the challenge accepters and Nancy Alsup supported the group from the sidelines.
“We are out in support of the fight against ALS and we are here in support of Josh Wandell,” Alexander said.
With such a large group, planners decided it would be more practical to use a fire hose to douse the group instead of individual buckets. While there were no actual ice cubes falling down from above onto the challenge accepters, all agreed the water was cold enough to meet the requirements.
“I understand that they put ice cubes in the water in the truck and let it sit a while,” Alexander said. “It was definitely cold enough.”
The city has now extended a challenge to the Carter County Rescue Squad, Sycamore Shoals Hospital and the City of Johnson City.