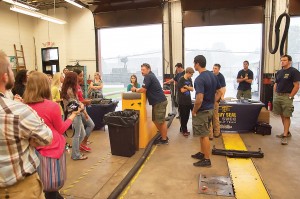 Students at Elizabethton High School got a peek at what it takes to be a Navy SEAL during a special event Wednesday.
The Navy arranges for SEALs and the Special Warfare Combatant Crew to visit high schools and share information on the programs, as well as recruitment possibilities.
“We are here to help spread awareness of naval special warfare,” said Phil “Chief Sandy” Sandberg.
Several Navy crew members visited EHS and brought along some of the equipment and vehicles they use on missions. This included a Honda 450 dirt bike, a LT ATV and a Special Operations Craft – Riverine (SOC-R) boat.
Sandberg said these items were used frequently in the SEAL and SWCC community on missions. The ATV and dirt dike are used for reconnaissance missions and the boat is used for insertions, extractions and reconnaissance.
Another part of the event focused on physical fitness.
Students who could complete 10 pull-ups correctly earned a Navy T-shirt; completing 50 pushups earned a Navy water bottle.
“We want to encourage students to be more active,” Sandberg said.
He said the ultimate goal of the event was to share news about the Navy SEALs and SWCC programs.

From meeting trees and snakes to chasing butterflies and climbing balds, there’s a little something for everyone this week at... read more