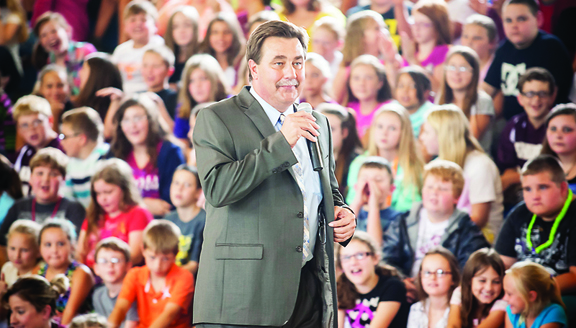 Carter County schools have something to celebrate – two times over.
Two county schools – Valley Forge Elementary and Hunter Elementary – have been recognized as “Reward Schools” by the Tennessee Department of Education for test score improvements made by their students.
The state recognizes the top 5 percent of schools in the state for performance, as measured by overall student achievement levels, and the top 5 percent for year-over-year progress, as measured by school-wide value-added data, as Reward Schools.
Special assemblies were held at the two schools to announce the recognition to the students and staff. Director of Schools Kevin Ward, other school system officials and members of the Carter County Board of Education attended both assemblies.
“This is an amazing and wonderful accomplishment,” Ward told the students at Valley Forge Elementary. “You are a Reward School. You are one of the best of the best in the state.”
Ward thanked the students at both schools for their hard work improving their Tennessee Comprehensive Assessment Program, or TCAP, test scores.
“Based on last year’s test scores – at the end of the year when you took your TCAP tests and focused really hard – you did really well,” Ward said. “I want to thank you as students for taking these tests seriously.”
The director also offered praise to the teachers, administrators and support staff for their work in improving the student’s test scores.
“I do appreciate everything each one of our teachers, our administrators, and our support staff do on a daily basis,” Ward said. “It took the whole faculty, staff, administrators and teachers working as a group with a single focus to make this possible. They not only improved, they made some extraordinary growth.”
Teamwork and focusing on areas that needed improvement were the keys to success for this effort, according to the principals at Valley Forge Elementary and Hunter Elementary.
“Any child with a deficit was identified and we worked on that deficit,” said Leeann Carr, principal at Valley Forge Elementary, adding that a lot of work was done in small group sessions where teachers worked with students in 3-on-1 or 5-on-1 groups. She thanked the teachers and school staff and praised their teamwork.
Brandon Carpenter, principal at Hunter Elementary, also commended the teachers at his school for working together to meet the challenge.
“We just tried to create a team atmosphere,” Carpenter said. “I can’t say enough about the faculty, the teachers and my Assistant Principal Mr. (Mark) Revis. I challenged them, and they accepted the challenge.”
Carpenter said his staff also focused on those students who had demonstrated deficiencies. “The first thing we did was identify what we felt were our low points,” he said, adding they also looked at what they considered strengths to make sure those accomplishments did not fall behind.
Ward there is still room for improvement.
“We did have one focus school this year, Happy Valley Elementary,” he said.
Under state accountability standards, Focus Schools are the 10 percent of schools in the state with the largest achievement gaps between groups of students, such as students from economically disadvantaged backgrounds or students with disabilities.
“We have to focus on some subgroup improvement,” Ward said, adding the achievement gap needing the most improvement at Happy Valley Elementary was students with disabilities. “If it wasn’t for the one subgroup, according to the data Happy Valley Elementary would have been a Reward School as well.
“Their achievement was so high, but that gap closure was not what the state wanted it to be,” Ward added.