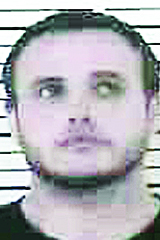 A Hampton man faces multiple charges following a motor vehicle accident after police said they found drugs, guns and untaxed liquor in the man’s car during a routine inventory.
Cody Joshua Madden, 23, 1545 Highway 321, Hampton, was arrested Tuesday by Elizabethton Police Department Officer Robert Bradshaw and initially charged with first offense driving under the influence and violation of implied consent.
But once the vehicle’s contents were inventoried before it was towed, Madden faced additional charges of possession of drug paraphernalia; possession of a firearm while under the influence; two counts of possession of Schedule III drugs; possession of Schedule VI drugs for resale; and receiving, possessing or transporting of alcoholic beverages.
According to warrants taken out by Bradshaw, officers were dispatched to a motor vehicle accident with possible injuries on Stateline Road. Bradshaw said when they arrived at the scene, officers found a 2009 Honda Accord sitting in the grassy area behind Life Care Center and spoke with the driver of the vehicle, who they identified as Madden.
Bradshaw said Madden was unsteady on his feet and performed poorly on field sobriety tests. Madden was then taken into custody and charged with DUI and violation of implied consent.
After Madden’s arrest, Bradshaw said, officers did an inventory of the vehicle before having it towed.
During the inventory, officers reported finding a black Savage rifle with a round in the weapon’s chamber and a Berretta 9mm pistol with a loaded magazine. Bradshaw said they also found a backpack containing what was identified as marijuana, scales, plastic baggies, a partial pill identified as Suboxone and “a baggie marked ‘roids’ which contained 16 red capsules with no markings.”
Officers also found a cooler behind the driver’s seat of the vehicle holding three quart-sized canisters “of a clear liquid consistent with untaxed liquor,” Bradshaw added.
After the inventory, the other charges were added to the DUI and violation implied consent counts.
Madden was taken to the Carter County Detention Center and later released. He is scheduled to appear in General Sessions Court on Oct. 6.

Safety on the job will be the focus of a course offered next week at Northeast State. The Workforce Solutions... read more