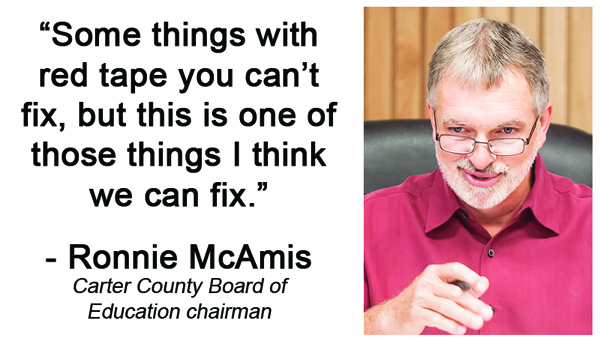 Sometimes, you can’t cut red tape.
That’s when it’s time to bring out the duct tape, so to speak.
When federal regulations denied 7th and 8th graders at Cloudland High School free meal eligibility, Carter County school officials went to work to find a solution to the problem.
Beginning on Monday, those students will receive their meals at no cost, with the Carter County school system footing the bill.
Fashioning a homemade workaround to a federal rule, the Carter County Board of Education unanimously agreed Thursday to provide free meals to 7th and 8th grade students who attend the high school.
Marisa Potter, director of food services, told the board those students had been denied participation in the federal Community Eligibility Program even though the board opted to join the federally subsidized free-meal program for grades K-8 for the first year.
Potter said when the program was implemented, it was assumed the 7th and 8th grade students at Cloudland would have a seat at the lunch table. But since the program was adopted, federal officials told the the school system the students, which are housed at a high school, were ineligible for the program.
The school system has been working to resolve the issue, Potter said, but had reached a dead end.
“The law is the law and we just don’t qualify,” she said, adding that she searched for a loophole. “We can’t get them to change the law.”
Board member Kelly Crain voiced his support of the program.
“When one gets something, I think they all should,” he said, adding he felt it was wrong that the Cloudland students were left out.
Crain made a motion to use money from the food service department’s budget surplus to cover the cost of meals for the Cloudland 7th and 8th grade students so those students would also receive their meals at no cost to their families. The motion was seconded by board member Craig Davis and passed unanimously on a vote.
Chairman Ronnie McAmis voiced support for Crain’s motion.
“We can’t feed those students because of government red tape,” he said. “Some things with red tape you can’t fix, but this is one of those things I think we can fix.”
McAmis estimated it will cost approximately $23,000 to feed those students breakfast and lunch for the school year.

A “soft lockdown” of all Elizabethton City Schools will be lifted today after an Elizabethton Police Department investigation found no... read more