Firefighters unable to pinpoint cause of blaze 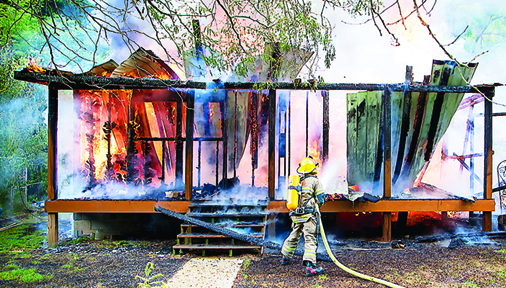 Photo by Brandon Hicks
A home on Bishop Hollow Road was destroyed in a fire Thursday afternoon. Firefighters have not been able to determine how the fire started.

Firefighters have not been able to find the cause of the fire that destroyed a Stoney Creek home on Thursday afternoon, according to a police report.
Carter County Sheriff’s Department Sgt. Larry Vaughn responded to the fire at 231 Bishop Hollow Road shortly after noon on Thursday. In his report, Vaughn said when he arrived on the scene he observed “heavy, black colored smoke” coming from the home and flames coming through the roof and windows of the front and middle sections of the home.
While on the scene, Vaughn said he spoke with the owner of the home, Lori Oliver.
“Mrs. Oliver said that she and her son, identified as Rocky Oliver, were in the side yard of the residence when they noticed smoke,” Vaughn said, adding that Lori Oliver reported no one was inside the residence at the time. “Mrs. Oliver said she had left the washer and dryer on and she left the stove on while cooking dinner.”
“Mrs. Oliver also said she had a scented candle burning in the living room which was located near the front of the residence near the middle.”
Vaughn said she also reported she had been having trouble with her outside air conditioning unit at the home.
“Fire Chief Benny Colbaugh said he believed the fire had started inside, near the middle, and toward front of the residence,” Vaughn said. “Chief Colbaugh said he was unable to determine the cause of the fire.”