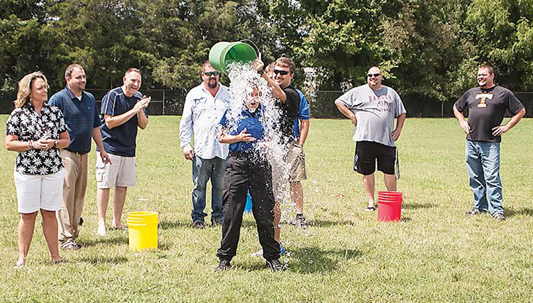 Photo by Brandon Hicks
Deputy Michele Meade, the school resource officer for Hunter Elementary School, takes the Ice Bucket Challenge Friday afternoon at the school. She was one of 10 individuals to participate in the challenge.

At Hunter Elementary School, the teachers and staff take challenges seriously.
Last year, the school was challenged to improve test scores.
They met the challenge and Hunter was recognized as a Tennessee Reward School.
On Friday, the school answered another challenge – the Ice Bucket Challenge – and once again showed determination to answer in a big way.
After the water and ice was cleared away, 10 teachers and faculty members had completed the challenge to show their support for those suffering from amyotrophic lateral sclerosis, or ALS, which is also known as Lou Gehrig’s Disease.
Hunter Elementary School Principal Brandon Carpenter – the first in line to accept the challenge on Friday – said for him the challenge does not just have a national focus, but a local one as well. Last year East Side Elementary Principal Josh Wandell was diagnosed with ALS.
“We want Josh Wandell to know we’re on his side too,” Carpenter said.
On Friday, the students of Hunter Elementary circled around the playground where they watched and cheered as their teachers and principals took the challenge. Carpenter said including the children was important because it helped spread the message.
“It is a great cause,” Carpenter said. “It is a great way to bring everyone together.”
Plus, he added, “The kids enjoy it.”
Many of the children chanted for their favorite teachers and even suggested some to be challenged.
Carpenter and Assistant Principal Mark Revis were the first two to take the icy plunge. Both challenged fellow staff members and teachers at Hunter Elementary. Many of those who were challenged stepped right up to immediately take the plunge and continued the trend of challenging their fellow teachers.
School Resource Officer Deputy Michele Meade extended her challenge beyond the elementary school. “I’m going to call out all of the other Carter County resource officers, all the Elizabethton City resource officers and Walters State Police Academy,” she said moments before a bucket of ice-filled water was poured over her head.
Others taking the challenge at Hunter Elementary on Friday were: Bill Jones, 2nd grade teacher; Tracey Shoun, art teacher; Tommy Vaughn, 3rd grade teacher; James Pearson, physical education teacher; Nathaniel Treadway, grades 6-8 science teacher; Dale Campbell, computer lab teacher; and Rick Fisher, special education teacher.
The Ice Bucket Challenge to raise awareness of ALS has become a viral trend on the internet. In recent weeks several celebrities and even former President George W. Bush have shared videos on the internet of their own challenges.
The ALS Association issued a press release on Friday documenting the donations which it has received since the Ice Bucket Challenge took off. As of Friday, the ALS Association reports it has received $53.3 million in donations from July 29 through Aug. 21. The press release said during the same time frame last year the organization received $2.2 million in donations. The Association also reported that since the Ice Bucket Challenge started it has received donations from 1.1 Million new donors who had not previously donated to the organization.