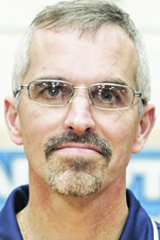 A former Carter County School teacher charged with theft was granted diversion in Criminal Court on Thursday.
Leon Tolley, a long-time teacher at Hampton Elementary School as well as the coach of the Hampton High School girls basketball team, was charged with two counts of theft of property under $500 in May in an indictment handed down by a Carter County grand jury.
In December 2013, Tolley was suspended from his teaching and coaching duties when the investigation began. He later resigned from his position, according to Director of Carter County Schools Kevin Ward.
Tolley was accused of stealing medication from the purse of a fellow teacher on two separate occasions. In May, after the indictment was served on Tolley, Carter County Sheriff’s Department Capt. Rocky Croy said officers had interviewed Tolley and he had confessed to taking the medication from the teacher’s purse.
In Criminal Court on Thursday, a “Memorandum of Understanding” was filed in the case against Tolley and signed by the district attorney general’s office, Tolley’s attorney Steven Finney and Criminal Court Judge Stacy Street.
The memorandum notes that the district attorney general granted a request for pre-trial diversion, with a list of stipulations.
The stipulations in the agreement are:
• The prosecution of the case will be suspended for six months;
• Tolley will not commit any offenses during the diversion period;
• Tolley will pay the court costs as specified by the court;
• Tolley will pay all costs of his supervision, counseling, or treatment;
• Tolley waives his right to a speedy trial;
• Tolley’s behavior will be consistent with good citizenship;
• Tolley will report to Crossroads Probation on a regular basis as required by that department; and
• With the successful completion of six months probation, the case will be dismissed with prejudice.
Under the memorandum of understanding, if Tolley successfully completes the six months of probation and abides by the court’s orders, the case against him will be dismissed and the charges will not appear on his criminal record.
If Tolley fails to complete probation or violates any of the court’s directives, the prosecution of the case against him could resume.
The pre-trial diversion granted to Tolley through the memorandum does not require Tolley to enter a plea of guilty.