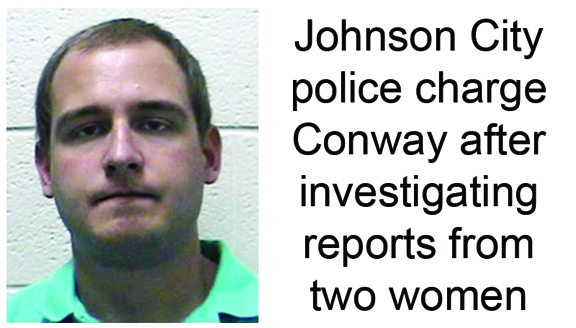 A former Elizabethton High School coach was charged with two counts of indecent exposure in Johnson City after police investigated reports from two women.
Justin Thomas Conway – no age or address available – was arrested by Johnson City Police Department Officer G. Howell on Aug. 19.
Conway resigned in July from his position as the head coach of the EHS swimming team.
Ed Alexander, director of Elizabethton City Schools, said Conway had been employed as the head coach for the boys and girls swim teams until July of this year when he resigned. Alexander added Conway had not been a teacher with the system and was employed as a coach only.
“He said he was finishing his master’s degree and was going to be looking for a full-time job,” Alexander said. “Then on Aug. 17, I got an e-mail from him and he let us know for sure that he would not be back.”
He added Conway “was never under contract this year.”
According to police reports, the first incident was reported on Aug. 5. The woman who filed the complaint in that incident said she was sitting on the porch of her residence on Mary Key Street around 6:45 p.m. that day when she saw a male subject driving a vehicle through the alleyway by her home.
“The suspect started asking the victim directions to Walnut Street and kept asking the victim questions,” said Howell in his report.
The officer added the woman said she approached the vehicle and the man then exposed his genitals and began to fondle himself.
“The victim stated that she felt disgusted and embarrassed and told him to go to McDonald’s or Dairy Queen for directions,” Howell said. “The suspect drove off and the victim went inside to call 911.”
The second incident was reported to police on Aug. 17, but the complainant in that case – also a woman – said the incident had occurred on Aug. 1 around 6:30 p.m.
According to a report by JCPD Officer J. Wilson, the woman reporting the Aug. 1 incident said she was walking in the area of Bert Street and Dyer Street when a young white male in a small gray car pulled up next to her and asked for directions to Walnut Street.
She reported that while she was speaking to the man he exposed himself and began to fondle himself and she ran away from the vehicle.
“On (Aug. 17) the victim was out for another walk whenever the same vehicle and suspect pulled up and she advised once again asked for directions to Walnut Street,” Wilson said in his report, adding that “She advised that she acted like she was getting directions on her phone for him and actually called 911.”
Wilson said that the woman said she was positive he was the same man from the previous incident.
Wilson noted the woman reported the man had “done the same thing to friends of hers in the same area of Keystone.”
According to the report, the man – identified as Conway – gave officers “no good reason for why he was in the area of Keystone.”
After the encounter on Aug. 17, Howell said the women who reported the two incidents were shown photographic line-ups and both women identified Conway as the man who had exposed himself to them.
Howell said he obtained warrants for Conway’s arrest and then contacted Conway and asked him to turn himself in.
Conway complied, turning himself in at the Johnson City Police Department on Aug. 19.
“After being read his Miranda rights and signing the form, (Conway) confessed to the crime and gave (me) a written statement,” Howell said.