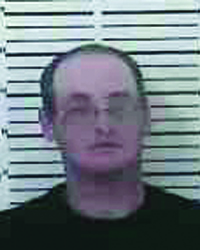 An inmate in the Carter County Detention Center is facing additional charges after he was accused of vandalizing two of the jail cells he was placed in over the weekend.
David Lynn Blevins, 23, 114 Church St., Elizabethton, was charged with one count of vandalism under $500 and one count of vandalism over $500.
Blevins was faced with the first charge on Friday after he was accused of drawing pictures on a cell door. The drawings were similar to pictures he had drawn on paper that were confiscated as contraband by Carter County Sheriff’s Department Capt. Tom Smith.
The incident report stated Blevins acknowledged drawing the picture on the cell door.
The second charge came on Sunday, when CCSD Cpl. Samantha Beckett said she saw that letters had been scratched onto the padded cell door.
Beckett reported she had checked the cell before Blevins was assigned to it, and there were no marks on the door. She added the cell had been remodeled last week and was in new condition.
Blevins is scheduled to appear in General Sessions Court on Oct. 10.