Twist on the trail 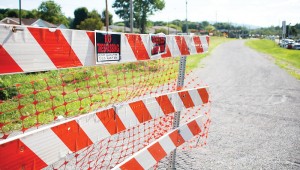 The Tweetsie Trail from Johnson City to Elizabethton is largely complete and is already being used by many Elizabethton and Johnson City residents.
The key word, however, is “largely.”
One area remains off-limits, but that hasn’t stopped people from using the section of the Tweetsie Trail that extends through the Gap Creek construction area.
Tennessee Department of Transportation Community Relations Officer Mark Nagi said the portion of the trail that crosses Gap Creek Road is closed to the public.
“This is an active construction zone and the public needs to be made aware that they should not be accessing the trail through the Gap Creek Road intersection,” Nagi said.
Tweetsie Trail Taskforce Chair Dan Schumaier said the taskforce was aware of the issue and would discuss at the meeting next Tuesday.
Nagi said barricades have been put in place on the trail to prevent pedestrians from entering that portion, but that trail users have been moving the barricades to continue on the trail.
“We have stepped up measures to help deter pedestrians and bicyclists from moving traffic control devices at this intersection,” Nagi said. “The main safety tip we can pass on is to not use this particular section of the trail.”
Nagi said the project is currently ahead of schedule, and that TDOT is working to have the trail section opened by the “earliest possible date.”
The total project is expected to be complete by May 31, 2015. The project is currently ahead of that schedule, with 81.7 percent of the work completed with 73.5 percent of time elapsed.