A love of books 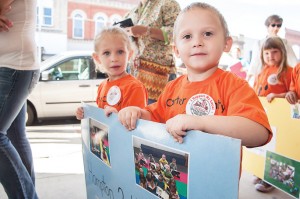 “We love books!”
That was the anthem for the day Wednesday with the Carter County Imagination Library march through downtown to celebrate the 10th anniversary of the Governor’s Books from Birth program.
The party had a some very special guests of honor; more than 200 preschool and Head Start students from the city and county school systems and Tennessee first lady Crissy Haslam.
The celebration started with a short parade of children marching through downtown Elizabethton, some carrying pictures of their favorite books or characters and others dressed as storybook characters.
While the children marched with their teachers and parents, they chanted “We love books!” to the small crowd of onlookers that came out onto the sidewalks to watch them march past.
After the parade, there was a short ceremony in the grassy lawn area across from Edward’s Island Park.
Haslam spoke briefly and thanked the local volunteers for supporting the Carter County Imagination Library.
Haslam said one of her main focuses as the first lady of Tennessee was to promote literacy for younger children, focusing on the younger years from birth until the children started elementary school.
“Literacy is important to me, and it is important to the state,” Haslam said. “Reading is so important to help children be prepared for school.”
She noted that Tennessee was the only state in the country to have the Imagination Library in all of the counties in the state. Of the eligible children in Tennessee, 56 percent are enrolled.
Haslam said the goal was to have as many children registered as possible.
“We want more children enrolled, and we want you to help us get more enrolled,” she told the children.
Theresa Carl, president of the Governor’s Books from Birth Foundation, recognized all of the organizations that supported the Carter County Imagination Library. These included the Carter County Car Club, Ingles, Food City, the Elizabethton Star, Speedway Children Charities, Friends of the Library, Kiwanis Club of Elizabethton, Carter County Bank, Northeast Community Credit Union, Citizens Bank, Summers Taylor Inc., Wal-Mart, the Carter County ,ayor, the City of Elizabethton, Snap-on Tools and CCIL Board Chair Lilo Duncan.
Haslam also recognized all of the local Imagination Library board members.
After the recognitions, the readers were given goody bags from the Governor’s Books from Birth program. They also were treated to cupcakes in the park by the CCIL.
The Governor’s Books from Birth Foundation was created in 2004 to give every child in Tennessee from birth to age 5 access to receiving Imagination Library books at no cost to families, regardless of income.
With funding support from the Tennessee General Assembly, foundations, individual donors and corporations, the Foundation matches all funds raised by each county’s Imagination Library affiliate — a public-private partnership unique to Tennessee.