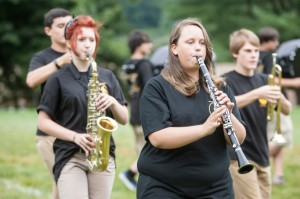 The Cloudland Highlander Band is small in numbers, but what it lacks in size, it makes up for in pride and talent.
The 28-member marching band is looking to build on last year’s achievements. In competition last year at Daniel Boone High School, the Highlander Band placed second out of seven overall in Class A2. In addition, the band took home Best in Class in Percussion, and received its first superior rating in several seasons.
The band also competed at the Chilhowie Apple Festival, at Appalachian State Marching Band Festival in Boone, and at Alcoa.
This is director Josh Ogle’s third year leading the Cloudland band. As director he teaches students in grades seven through 12. “At the junior high level we teach the fundamentals of band and playing an instrument and the challenges of playing and performing,” Ogle said.
Presently, the band is practicing for its football halftime show, which carries the theme “Music of the Night.” According to Ogle, featured music will include the songs “Some Nights,” “Dream On” by Aerosmith, and “Music of the Night,” one of the songs from “Phantom of the Opera.”
“Our kids are really into the music we’ve chosen, and they’re ready to perform,” said Ogle.
Halftime shows are just part of the repertoire. The Highlander Band plays a range of popular music with an ear toward entertaining their audience.
Band members follow the games and root for the team. That’s part of the fun of being a part of the band — except when the team suffers defeat.
Ogle said the band will also participate in some community events. “We will perform in the Elizabethton Christmas Parade, and we hope to be in the Newland, N.C., holiday parade,” Ogle said.
The community and the school are in the midst of a campaign to raise funds to buy new uniforms for the band. “The uniforms we have are 12 to 14 years old and we’d like for our kids to look good and equip them with the best to enjoy what they do,” Ogle said.
Earlier this summer the community hosted a “Fun Day” at the Roan Mountain Community Park to raise funds for the band. “It was an all-day event, and got us off to a good start,” Ogle said.
Also, a motorcycle ride fundraiser is held each August.
This year’s drum major is Lakota Oxendine, who Ogle described as a real leader.
The Highlander Band is a fixture at school events and is the pride of Roan Mountain.
“We enjoy a tremendous amount of support from the community. They support us in every way that they can, and it means a lot to the band,” Ogle said
Ogle is a native of Knoxville and received his degree from the University of Tennessee.
Homecoming will be celebrated this year Sept. 18 in a game with Unaka High. Prior to the game there will be a homecoming parade in the Roan Mountain community, with the Highlander Band stepping high and playing loud.