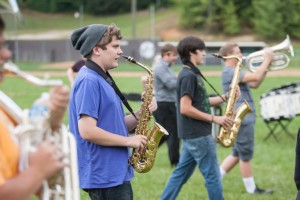 On Friday nights, a group of Johnson County High School students marches across the field with power and precision, wowing the crowd with colorful uniforms, clever schemes and talent.
The celebrated football team?
No — well, yes — but this story is about the school band. The Longhorn Band is the love of Mountain City, and the musicians are winners on and off the field.
For the past several years the band has struggled through changes in director. Third-year director Jacob Pitts, a native of Elizabethton, is in the process of changing all of that. His plans are to continue to promote the band and to increase its numbers. “What they lack in size they certainly make up for it in musicianship,” Pitts said.
The band, middle school and high school combined, has approximately 70 students, however, at the high school level there are only about 30 participating students.
During summer camp and at after-school practice the band is focused on its football halftime show, which this year has the theme “Dimension of Mind: Journey Through the Twilight Zone.” Some of the featured music includes “Pit of Man’s Fears,” “Suspicion,” “Portrait of Madness,” and “Dimension Mind.”
“Through the twilight zone, you’re traveling through another dimension, a journey into a land whose boundaries are that of imagination, and music helps us do that,” Pitts said in explaining the halftime theme.
“We started practicing the music in July at band camp. My responsibility is to get the kids excited about the show, its music, and now that school has started, to keep them interested and to make sure they stay excited,” Pitts said.
This year the Longhorn Band plans to participate in four competitions, among them the Husky Vanguard Invitational at Ashe County High School in North Carolina, the Chilhowie Apple Festival and the Carroll County Cavalier Classic.
“The band has done extremely well the past two years in marching competition, and we hope to continue building on those achievements,” Pitts said.
Moriah Franklin will serve as this year’s drum major.
“All of our kids are great, and they give their best at practice and, especially when they step onto that football field on Friday nights. They are excited about what they do, and take pride in the band,” Pitts said.
He also noted that the band enjoys a lot of support from the school and community. “They are definitely a source of pride in the Mountain City community, and the students feel that support,” Pitts said.
In addition to school functions, the band is host to a Christmas concert and a spring concert each year and is open to playing at community functions.
Pitts, who graduated from Elizabethton High School in 2005, received his degree from ETSU. “I like being close to home and I like the small-town feel of Mountain City. We have a great school at Mountain City and a great group of students. My goal is for us to get better and better,” he said.