Lights! Camera! Music! HHS Band is taking a trip to the movies 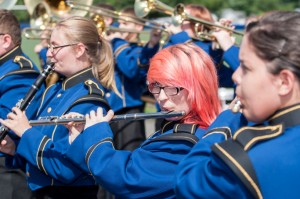 The Hampton High School Bulldog Band is taking a trip to the movies.
Nope, they’re not skipping out on their Friday night performances at the HHS football games.
This year, the 24-member HHS band will perform a show featuring theme music from many popular movies.
HHS Band Director Bryan Angel said the show would consist of music from top movies such as “Superman,” “Star Wars,” “ET” and “Jurassic Park.”
Angel said the students are still in the process of learning the music for the show, but that so far they have enjoyed the show selections. He noted that this year’s show was selected by former HHS band director Onsby Rose before he left HHS.
“They all like the music,” he said. “They are already familiar with it, which is part of the appeal. The kids know it and the audience will know it. When they start to play, they will think ‘I know that song’.”
Angel said one key area for the HHS band this year will be growth. The band has 24 members in high school and additional members at Hampton Elementary preparing to enter the band when they go to high school. Angel said the band is continuing to grow each year.
“When we were getting ready for the school year, the faculty talked about one word that they would choose for the whole year to modeled after, and I picked growth,” Angel said. “I want the students to grow musically and as people. I want them to be in a better place after this school year is over.”
Angel, a first-time band director, said his goal for the school year is that all band members would become better musicians.
He said he wanted them to learn more about performance, music theory and listening in context. After that, he said, the “contests take care of themselves.”
To prepare for the upcoming year, the students participated in a three-week band camp. He said his main focus during the upcoming year was not the amount of contests that are won but the learning experience for the students.
“Regardless of how many contests they win, I hope they are better people at the end of the school year. I hope that we are creating better citizens who will give back to the community in the process. While my job is to teach music, that is my hope for the students.”
This year’s Hampton drum major is senior Adam Ingram.
The Hampton Band will participate in two competitions this year. They will take part in the Chilhowie Apple Festival and the John S. Battle contest in Bristol. They will play at the HHS home and away football games as well.