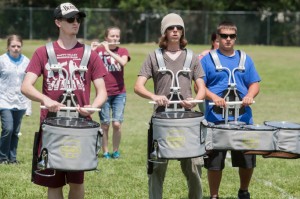 Ay, caramba!
The Happy Valley High School Warrior Band will be spicing things up with a Latin-themed show for this school year.
The band is taking a break from its tradition of hosting rock-and-roll based performances to offer their audience a taste of music from Latin America.
HVHS Band Director Raymond Morton said he selected the show to provide a change of pace for the band and for audience members.
“It is something different,” Morton said. “We have done rock music for the past few years, so it is kind of nice to be doing something different.”
The show will feature the songs “El Cumbanchero”, “Novus”, “I Know You Want Me” and “La Lambada.”
The HVHS band has 50 members this year, which is close to what the enrollment was last year. This year’s Happy Valley drum major is Brock Daniel.
“It keeps going up,” Morton said of the enrollment. “It’s fun anytime there are more kids that want to be a part of the band.”
To get ready for this season, the band completed a week-long band camp the last week of July. The Happy Valley Band will participate in two competitions this year, the David Crockett competition on Sept. 27 and the Science Hill contest on Oct. 25. They will play at the HVHS football games as well.
Morton said the band’s season was more about the performance experience and not about the contest results.
“We are going to get out there and do our best and hope that everyone enjoys it,” Morton said.