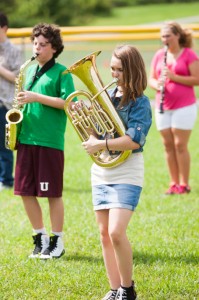 While Unaka High School may not boast a lonely hearts club, members of the band will be paying homage to Sgt. Pepper and other musical works by The Beatles this year.
“This is probably the hardest music we have done for marching band since I have been here,” said UHS Band Director Jeremy Swain, who is now in his seventh year as leader of the band.
When they take the field this year, the Marching Rangers will be playing an assortment of Beatles songs. Swain said music this year includes the ever-popular “Sgt. Pepper’s Lonely Hearts Club Band,” “The End,” “Eleanor Rigby,” and a medley of “Blackbird” and “Yesterday.”
“We’ve still got polishing and tightening up to do but they are doing really well,” Swain said of the students in the band. “I think they enjoy the challenge.
“I feel like because it is challenging and because they are succeeding it has been a big confidence builder,” he added.
Swain said the lyrical music style of The Beatles is full of complex harmonies and requires more finesse to play than some of the music previously featured by the band.
“It is well-written, well-conceived music,” he said. “For that reason it holds up today.
“It’s not your everyday radio sound,” he added. “There is more to it. It is more thoughtful.”
Some of the changes for this year include the addition of a xylophone on the field and some auxiliary percussion on the sidelines, Swain said.
When the band begins to march, Swain said fans will see some of the familiar marching band shapes on the field, but he said if you keep an eye you may just see a submarine make its way across the field. There is no word on whether or not the submarine will be yellow.
Swain said some of the band members were familiar with the music by The Beatles but for some it was the first time they had heard the songs. “They probably know who The Beatles are, but don’t know their music,” he said.
In addition to their marching duties, the band also has a number of other gigs they perform throughout the year. The band does a concert at Christmas, one in the Spring and a special concert for the student body, as well as performing at the high school’s graduation ceremony. The band also goes on tour with stops at several local elementary schools.
The band took part of its Christmas Concert on the road last year and travelled to local nursing homes to play for residents there. “They really enjoyed that, so we will probably do more of that this year,” Swain said of the students.
Last year, Swain said, the band performed well in competition and he is hoping to build in that success this year.
“I would like for us to put together a solid showing in competition this year,” he said. “Last year we had some success with that and I think the kids are hungry for it.”

A love of books

“We love books!” That was the anthem for the day Wednesday with the Carter County Imagination Library march through downtown... read more