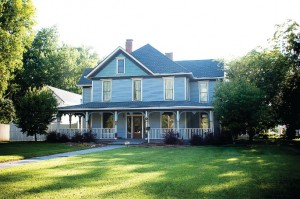 A historic house will no longer be a fixture on Riverside Drive, but only after the Historic Zoning Commission says the owner did everything possible to save the 19th century structure.
The commission gave unanimous approval to the request to demolish the home at 203 Riverside Drive after the home suffered severe structural damage that is too extensive to be repaired.
Homeowner Melissa Anzelc said she plans to built the new home as close as possible to the original house.
Anzelc said the issues with the home started after a chimney collapsed inside the home. The chimney was the support for two load-bearing walls in the home.
“The framing sat on these little brick ledges,” she said. “So when the chimney collapsed, the walls started falling in.”
She said she had the home inspected by engineers and contractors who agreed it was too dangerous to try to repair the home because if the walls shifted again, the entire structure could collapse. The family has not been living in the home since the damage was discovered.
Anzelc said she had been researching options for one year before reaching the decision that the home would have to be torn down.
She added that she did not consider the move to be a demolition but a dismantlement of the house. She said she wanted to take as much of the original material as possible from the older house to use in the new home, including mantles, fireplaces, tiles, wood trim, the staircase and the original doors.
“I have always loved old homes,” Anzelc said. “I was so excited to be able to buy this one. I want the new home to feel like the same house when you walk into it.”
Anzelc is working with a home salvage specialist who will start to dismantle the home sometime in the next two weeks. Once the process starts, she expects that it will take around five weeks to complete.
Commission chair Sarah Baker said she was sorry to see the historic home go but knew that Anzelc had done everything she could to save the building.
“You have fought the good fight and have done all you can do and then some,” Baker told her. “You are trying to do the best you can under insurmountable circumstances.”