Trail’s tale has roots in the past 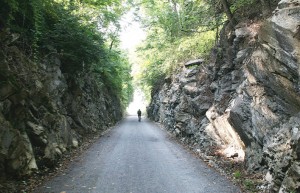 The Tweetsie Trail was dedicated and opened with a ribbon cutting Thursday afternoon.
But while construction on the trail was completed in about a year, the origins of the walking and biking path stretch back many years.
During Thursday’s ceremony, former Johnson City Mayor Steve Darden said the trail project began in May 2006 when people began to express interest in a walking or multi-use trail, along with the concern that the old East Tennessee and Western North Carolina railroad connecting Elizabethton and Johnson City would be abandoned.
“There was a lot of interest in the trail,” Darden said. “It is impossible to say that this is one person’s idea. It was a collective idea that arose all at the same time.”
While it was a collective idea the trail was needed, and the railway line should be a part of it, Darden said there was not a collective agreement on how the trail should be used.
He said some wanted the walking and biking trail while others wanted the rail service to remain, either as a commuter rail between Johnson City and Elizabethton or a excursion service.
Darden said the key in the project was to convince the railroad not to abandon the line, but to sell the right-of-way to Johnson City and railbank the property in case it was needed in the future.
He said in January 2007 Johnson City officials met with railroad officials to talk about the project, and in 2011 Johnson City purchased the property with a winning bid of $600,000.
In 2013, the railroad finished the salvage operations by clearing the right-of-way of ties and rails. The project began with Johnson City working on clearing and improving the pathway in June 2013.
The first phase, which was opened with Thursday’s ribbon cutting, runs from Alabama Street in Johnson City to near Pal’s in Elizabethton. The second phase will be in downtown Elizabethton and the third phase will extend from Johnson Avenue to Snap-on Tools.
While the Trail’s tale began on 2006, the route it traverses had its start 140 years earlier.
The narrow-gauge East Tennessee and Western North Carolina was chartered as the echoes of the Civil War were fading, and first carried North Carolina iron ore. Later, it carried other freight and passengers.
The “Tweetsie” nickname grew out of the sound of the locomotives’ whistles.