Tweetsie Trek: After years, rail line will see another ‘run’ 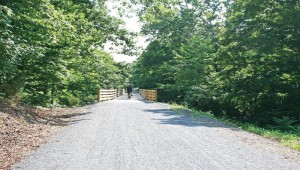 It’s time for a trek on the Tweetsie Trail.
After months of preparation, the walking and biking path from Johnson City to Elizabethton will officially open with the Tweetsie Trek, a run/walk/bike event, this Saturday.
Race organizer Ray Flynn said around 5,000 participants were expected to sign up for the family-friendly 4.3-mile run/walk and bike ride.
While online registration is closed, tweetsietrail.com notes that there are still a few hours for “in-person” registration at Memorial Park Community Center in Johnson City. Registration can be done at the center today from 11 a.m. to 8 p.m., according to the website.
The race for runners and walkers will be one-way from Lion’s Field in Elizabethton to the Memorial Park Community Center in Johnson City.
The bike run-ride, which is not a competitive race, will begin in Johnson City and will be round-trip to Elizabethton and back to the starting line.
Other non-Trek “traffic” will be allowed after 3 p.m.
Runners will start at 8:30 a.m.; walkers at 9 a.m. and the bike ride will begin at noon.
Participants are asked to carpool to one of the parking sites to help with parking congestion. From those parking areas, which are Elizabethton High School and the Cardinal Park area in Johnson City, racers will be shuttled to the starting line at Lions Field.
Shuttles will start at 6:30 a.m. and the last shuttle of the day will run at 1 p.m.
After the participants complete the race, there will be refreshments, vendors and music at the Memorial Park Community Center.