As Dexter Lunceford prepares to pick up the badge, outgoing sheriff points to staff, fight against meth 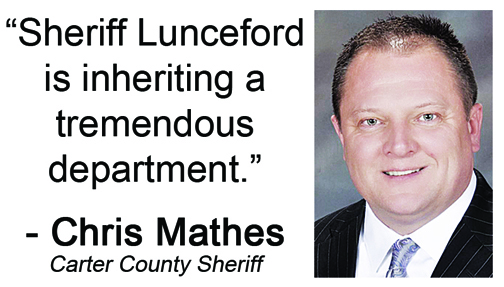 Sunday night will mark the end of an eight-year journey for a Carter County man who said he is not sure where the road ahead will lead him.
At 11:59 p.m. on Sunday night, Chris Mathes will mark the end of his watch as Carter County sheriff.
“I am going to take a few days off,” Mathes said of his immediate plans for the future. “My son is the most important thing to me and I want to spend more time with him.”
As for future employment plans, Mathes said he is still weighing his options; he has been in contact with federal and state officials as well as employers in the private sector.
“I am praying God will open the right door for me,” he said. “As far as my plans, I’m really open right now.”
“I’m not too good to start over and go back to a cruiser,” he added, saying that part of law enforcement was one of the things he most enjoyed and found to be the “most fun and most rewarding.”
Mathes said a return to politics in the future is not out of the question. “I’m not ruling out running again in four years,” he said.
But whatever the future holds, he said he is proud of what he accomplished as Carter County sheriff.
One of the biggest gains made during his tenure was to personnel, Mathes said. When he took over as sheriff in 2006, the Sheriff’s Department had just over 80 employees total for the Sheriff’s Department and jail. Now the department employs approximately 140.
“Every single person’s salary that was here is higher now than it was eight years ago,” Mathes said, adding he has had the opportunity to recruit “a lot of good people” for the department during his time as sheriff.
Mathes said the department expanded some of its existing programs during his watch.
“When I came we had one agent with the DTF (Drug Task Force),” he said, adding now the department has five agents assigned to work drug cases.
He said the department’s efforts to combat the illegal drug trade in Carter County have paid off not only locally, but that efforts by his department have helped influence state law.
“From 2009 to 2013, little Carter County Sheriff’s Office, our drug unit, put more meth charges on meth dealers than any other agency in the state,” he said. “I am leaving office having the No. 1 drug unit in the state for meth prosecutions.”
Mathes said those achievements were recognized by the state and helped contribute to changes in state law regulating the purchase of pseudoephedrine, the primary component for cooking methamphetamine. “We were a part of that,” he said.
Another expansion came in the School Resource Officer program, which places law enforcement officers in schools for added security. Mathes said when he took office there were five school resource officers for the county schools – one for each high school and one for the alternative school. Now there are 13 school resource officers serving the 14 schools of the Carter County school system, Mathes said.
During his tenure, Mathes said he also implemented a field training officer program that pairs new officers with seasoned officers for additional training beyond the requirements of the police academy.
Mathes said he is leaving the department in excellent shape for his successor Dexter Lunceford.
“We met with state auditors this week,” Mathes said. “He informed me there were no findings, which I am very proud of.” Whenever there is a change of elected official, the state comptroller’s office must complete an audit of the office to close out the books of the official leaving office.
Mathes said the Carter County Detention Center was recently inspected by the Tennessee Corrections Institute for their annual certification inspection.
“I feel comfortable saying we will maintain our state certification,” Mathes said. The detention center was inspected in June of this year but at that time some deficiencies were noted. The TCI gave the department 90 days to correct the issues before a re-inspection. Mathes said he called in state officials to conduct the re-inspection before the 90 days was up because the issues noted during the June inspection had been corrected.
Mathes said the department is also bringing in more money to the county than it was when he took office.
In 2004, Mathes said, the department’s drug fund – which is comprised of money taken from drug seizures – had a balance of just over $30,000. Mathes said the balance in that fund will be nearly $174,000 when he ends his tenure Sunday.
Mathes said there is currently more than $28,000 in the vehicle fund from the sale of seized vehicles and 39 vehicles currently in seizure which can be sold to benefit the county’s budget. He said he was also able to create a reserve fund holding $250,000 to be used for vehicle and equipment purchases by the department.
“Sheriff Lunceford is inheriting a tremendous department,” Mathes said.
One of the things he will miss about the job, Mathes said, are the officers and staff he has had the opportunity to work alongside – especially Chief Deputy Ron Street, whom he described as a “dear friend” and a great person to work with.
“My prayers go out to the men and women of this department,” Mathes said, adding he wishes them the best in their futures.
“Thank you to everyone for the last eight years,” he said. “It has been an honor.”
“It’s the hardest job I’ve ever had,” he added.

All aboard! Tweetsie Trail under way

“We’ve got a trail folks!” With that proclamation from Johnson City Mayor Ralph Van Brocklin the Tweetsie Trail, a walking... read more