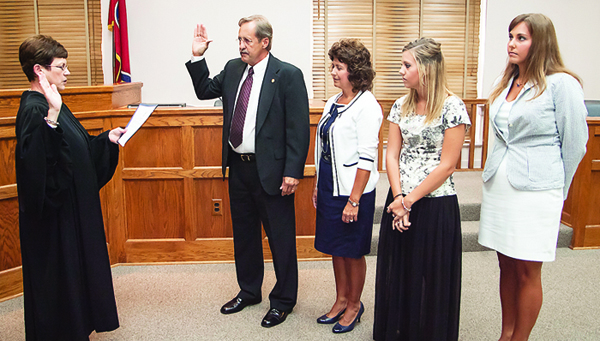 Photo by Brandon Hicks
Newly elected Sheriff Dexter Lunceford, second from left, is administered his oath of office by Circuit Court Judge Jean Stanley on Friday afternoon as his wife and daughters look on.

A lot of swearing took place Friday afternoon in the courtroom at the Carter County Courthouse.
This was no hotly contested case, but rather two ceremonies held to swear in officials elected during the general election held Aug 7.
Two separate ceremonies were held on Friday; one was for county officials and another for the state court officials serving the First Judicial District of Tennessee.
The first ceremony was held at 3 p.m. by Circuit Court Judge Jean Stanley and began with the elected constables – two for each of the county’s eight districts – taking their oath of office. Next was a member of the Carter County Board of Education followed by the County Commission.
A total of 24 County Commissioners – three for each of the eight districts – pledged to “perform with fidelity” the duties of their office and to defend the Constitution of the United States as well as the Constitution of the State of Tennessee.
The County Commission has a majority of new members. Of the 24-member body, only 10 are commissioners who served last term.
After the oaths by the commissioners, the county’s office holders were sworn in by Stanley.
County Clerk Mary Gouge, Superintendent of Roads Roger Colbaugh, Circuit Court Clerk Johnny Blankenship, Carter County Sheriff Dexter Lunceford and Carter County Mayor Leon Humphrey all raised their right hand and gave their oath to faithfully perform their duties.
The term of service for the newly elected officials does not officially begin until Sept. 1, but because that date falls on the Labor Day holiday, the ceremony was held on Friday.
Lunceford said he is prepared to take on his new role and is planning to do so at 12:01 a.m. Monday.
“I am going to go 10-8 over the radio,” he said. “10-8” is the 10 code which local law enforcement officers use on the radio when they come on duty for service.