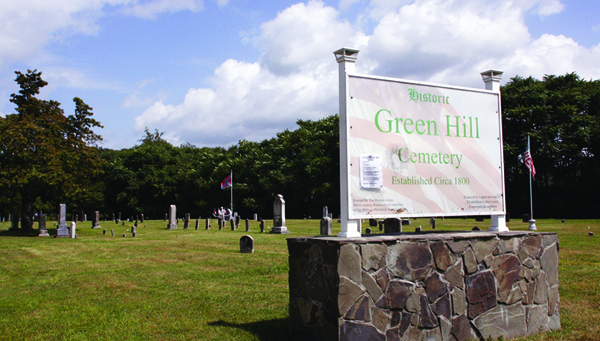 Photo by Abby Morris-Frye
Police are investigating two reports of vandalism at Historic Green Hill Cemetery. in the most recent incident it was reported a headstone had been knocked over and a flag and its stand were removed from the cemetery.

A local historic cemetery has reported two incidents of vandalism in recent weeks.
The most recent report came Aug. 28 when officers of the Elizabethton Police Department were dispatched to Green Hill Cemetery on West Mill Street on a report of a vandalism and theft. EPD Officer Jordan Ensor said in his report that he spoke with William Hicks and Donald Bowers when he arrived at the cemetery.
“Mr. Bowers stated that he is the Carter County historian and he came to the property and began to take pictures of the headstones when he discovered that a headstone had been knocked over some time during the night,” Ensor said. “Mr. Bowers stated he was at the property on the previous date and the headstone was fine at that time.”
Ensor said Hicks reported he arrived at the cemetery after Bowers and found someone had taken a flag and flag stand from the cemetery which were bought and maintained by the Sons of Confederate Veterans.
The incident on Aug. 28 happened approximately one week after another incident at the cemetery was reported. In that incident, which was reported on Aug. 20, one of the memorials at the cemetery was tampered with, a statute was moved and some flags were removed from their holders.

Teams of Cloudland High School students took home honors from the Appalachian Fair as part of the Future Farmers of... read more