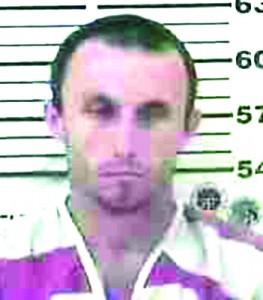 A Carter County man is facing multiple drug charges after officers said they found several drug-related materials while serving a warrant.
Robert James Moffitt, 38, 716 Sugar Hollow Road, Elizabethton, was arrested Friday morning by the Carter County Sheriff’s Department and charged with possession of Schedule VI drugs, possession of Schedule II drugs for resale, possession of drug paraphernalia, initiation of a process intended to result in the manufacture of methamphetamine and promotion of methamphetamine manufacture.
At approximately 9:20 a.m., CCSD Deputy Myles Cook and Sgt. Nick Andes arrived at 716 Sugar Hollow Road to serve an attachment pro corpus from Carter County Chancery Court on Moffitt.
Cook wrote in the arrest report that after asking another resident if Moffitt was home, the officers were given permission to enter the home to look for Moffitt.
Moffitt was found asleep in one of the bedrooms in the home. It was what officers reported to have found in the bedroom that led to additional charges for Moffitt.
“Upon entering the bedroom and seeing Mr. Moffitt, I also witnessed a large amount of equipment and components typically used in both the consumption and manufacture of methamphetamine,” Cook wrote.
Officers woke Moffitt and took him into custody. Cook wrote that after questioning, Moffitt said he was aware of the materials and gave consent for the home to be searched further.
During the search, officers said they found a duffel bag containing several coffee filters, latex gloves, a brush, an automotive filter, air pump, several tube or wire cutters, a flashlight, a measuring spoon, pure lye and a cereal box containing what officers believed to be ammonium nitrate.
“All of these materials are common in the manufacture of methamphetamine,” Cook wrote in the report.
In the bedroom where Moffitt was sleeping, officers said they found three small bags of a powdery substance believed to be methamphetamine for resale, two makeshift pipes believed to be used to smoke methamphetamine, a stained coffee filter with white powder residue, a “gasser” bottle with tubing in the top and a glass jar with white residue.
What officers believed to be evidence of drugs was seized and sent to the Tennessee Bureau of Investigation for testing. Other evidence was tested and destroyed as set by operating procedure.

Two motorcycles were reported stolen from the same apartment complex on Okolona Road this past weekend. The first theft was... read more