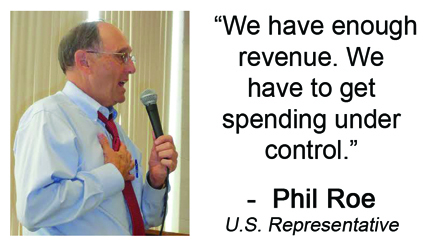 World events, the Affordable Care Act and the possibility of a presidential impeachment were some of the major concerns raised by constituents during a town hall meeting held Tuesday evening.
And U.S. Rep. Phil Roe also touched on the past – tying it to a warning about the future.
Raising the issue of national debt and government spending, Roe offered this assessment: “We have enough revenue. We have to get spending under control.”
Roe talked about his parents and the hard times they endured as they survived the Great Depression. And he cautioned that if the government does not get spending under control, the nation could once again face a financial crisis of that magnitude.
“That can happen again, folks. It absolutely can happen again,” he said. “We like to think it can’t, but it can.”
The town hall meeting took place at Unaka Elementary school in front of a crowd of approximately 40 residents. The event was emceed by Sonny Fletcher, a resident and business owner in the Stoney Creek community and one of the event’s organizers.
“I’ve known him for about 10 years,” Fletcher said of Roe while introducing the congressman. “The longer I know him the more respect I have for him.”
“I don’t know of anyone who works any harder for the people of East Tennessee and for this nation than Congressman Phil Roe.”
The congressman began his talk by explaining to those in attendance why he wants to hold town hall meetings in the communities he represents.
“You have no idea how important these meetings are for me when I go back to Washington,” Roe said. “The kind of common sense you have right here tends to get lost up there.”
Roe said meetings with his constituents help him keep in touch with their needs and concerns, and that the many in Congress lose that connection. He joked that sometimes the thinking in Washington, D.C., is off and he suspects “there is something off with the oxygen mixture there.”
The first subject broached by Roe was the waiting list scandal which plagued Veterans Affairs medical centers this year. The issue of “secret waiting lists” at VA medical centers came to light at a center in Arizona, Roe said.
“More veterans died out there (in Arizona) waiting for care than died at Benghazi that we are having a big investigation over.”
Roe said congress worked together in a bi-partisan effort to correct the problems plaguing the VA medical system. “This was not a partisan issue, it was not about Republicans or Democrats, this was about veterans,” he said.
Roe also touched on the Affordable Care Act and immigration reform before he opened the floor to questions from the audience. Questions were submitted in advance by members of the audience and then read out loud during the meeting.
One attendee asked if the impeachment of President Barak Obama was a possibility.
Roe said the possibility was there because of the Constitution but said “the votes are just not there in the Senate.”
Despite the lack of support for impeachment proceedings, Roe said Congress does have some options in limiting the President’s actions. He cited the lawsuit filed by congress.
“The lawsuit is important, what you have is a separation of powers question,” he said. “Does a president, not this president but any president, have the power to change the law.”
Two questions sought Roe’s opinion on the current situation in the Middle East and also the threat posed by ISIS and the death of a second American journalist which made the news on Tuesday.
“ISIS are the worst of the worst,” Roe said. “They are basically terrorists. They are like al-Qaeda.”
Roe said he felt the United States needed to take action in regards to the murders of U.S. citizens in the Middle East. “I am tired of protecting these fat, rich oil sheiks in Saudia Arabia,” he said.
He said not only does America need to take action but that other countries in the region and around the world need to take a action as well.
The unrest in the Middle East is something that the world will likely never see an end to, Roe said.
“It is never ending. It has always been never ending,” he said. “You can go all the way back to the first book of the Bible to Abraham, Isaac and Ishmael and see the conflict.”
When asked about the Affordable Care Act, also known as Obamacare, Roe said he supported the premise of the Act – to make healthcare affordable for everyone – but he does not support the way it was implemented. He said healthcare was not made more affordable and the only people who benefited were the insurance companies, which he said “came out smelling like roses.”
Roe said in his opinion the cost of health insurance will continue to rise while access to care will actually decrease.
Other questions included the possibility of setting term limits for members of Congress and mandatory drug testing for individuals getting benefits from the government, such as food stamps. Roe said he supported both of those principles.