Stadium site plans up for vote 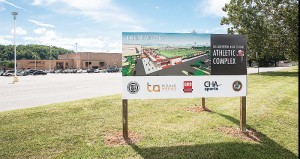 After about six years of planning, the final site plan for the new Elizabethton High School sports stadium is on the Elizabethton Regional Planning Commission’s agenda this evening for approval.
Elizabethton City Schools Assistant Superintendent Richard VanHuss said the site plans would include the new parking lot to the west side of the school campus between the school and the ball fields, the stadium project itself and the utilities associated with the project.
VanHuss noted that the final building plans, which include expanding the band room, will need to be approved at a later date.
The school administrator voiced hope that the approval of the site plan “will go smoothly.”
“There are no issues anticipated with the approval of the plans,” VanHuss said.
He said the plans must be approved before the school system can go ahead with a groundbreaking for the stadium.
“We are elated to be at this point,” VanHuss said. “It has been a long process. It has been around six years since we first started talking about turfing the football field and it has grown from there. Now that we are closer to having it happen, it is exciting.”
He said there will be a few more items to be approved by the school board before the actual construction will begin.
The construction management company, Goins Rash Cain, will submit its maximum project cost proposal for the school board to approve. After that, they will put the project out for bids, which will also come back before the school board.
The planning commission meets tonight at 6 p.m. at City Hall. Other items on the agenda are a request for traffic management on Charlotte Drive and Maryetta Avenue and a request concerning a sidewalk issue at Lewis Apartments on South Sycamore Street.