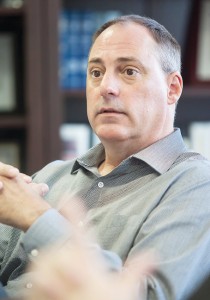 A lack of a quorum kept the Industrial Development Board from conducting business Thursday morning, but it didn’t keep those on hand from hearing an update on industrial opportunities for the county.
Carter County Tomorrow President Tom Anderson told the board about three possible projects that had the county under consideration.
He first mentioned Project Albuquerque, an industry that would require a 200,000-square-foot facility and would bring in 136 new jobs.
The second project, 20/20 Vision, would bring in 75 to 100 manufacturing jobs, and Anderson noted this industry was looking to open specifically in Elizabethton and Carter County.
Anderson didn’t announce the name of the third prospective industry, but told the group it was in the medical field. The project would be new construction and would bring 100 new jobs. Anderson said this company was looking at locations throughout the region, extending into North Carolina as well.
Anderson also asked the board members to put an item on the agenda for the next meeting to consider adding a fee for businesses that apply for payment in lieu of tax agreement.
He explained that in most cases the PILOT agreement was one of the first things the industry would apply for, even if they did not choose to locate in the county.
“PILOT agreements are asked about from day one,” Anderson said. “Now, they ask and we go through the process and there is no fee attached. I have a feeling that with the level of activity we are seeing, the requests for PILOTs will continue to come before the board.”
Many counties or development boards already have these fees in place as a way to cover the effort put into the process and to help with the cash flow needed for the board for items such as legal notices, Anderson said. He added that the fee would be a minimal charge if the board chose to approve it.