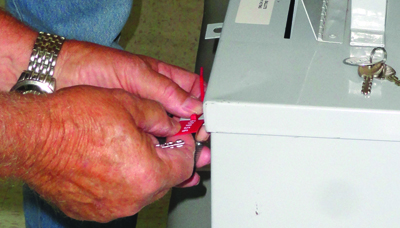 Photo by Abby Morris-Frye
Election officials have begun preparations for the upcoming November election. Here members are seen locking and sealing the boxes that will hold absentee and provisional ballots.

Election Commission members used their meeting Friday to look ahead to the November election. But they also looked back at the August vote – and what they saw in the rear view mirror brought questions about whether a commissioner had stepped over the line.
Or, rather, broke into the line.
Administrator of Elections Tracy Harris told members of the commission her office received two written complaints regarding the August election, one in reference to one of the commissioners – Bud Whitehead.
In that complaint, a woman from the Central precinct said she had been waiting in line to vote for more than two hours when she saw Whitehead enter the precinct, skip the line and proceed to vote without waiting in line.
Whitehead, who was in attendance at the meeting, said he had waited at the precinct for approximately one hour. Because it was getting late in the evening, he said, he asked the precinct officer if he could move ahead of the line to vote because he had to return to the courthouse to help work the election.
“Maybe that was an oversight by me by not voting early,” Whitehead said. “We’ve never had lines like that before.”
“Sometimes you got to do what you got to do and I done it,” he added.
Whitehead said he had stopped by the Central precinct several times on Election Day and noted the lines were long each time he stopped.
“Have you ever thought about early voting?” commission member Millard Garland asked Whitehead, who responded “I prefer to vote in my precinct.”
Commission Chairman Doug Buckles said members of the commission should not cut line.
“Each of us should vote early so that won’t happen,” Buckles said. “If we see it’s going to be a big election I suggest we early vote. If you want to wait in line that is your choice.”
Commission member Paul Souder agreed the commissioners should not use their position to skip line at the polls.
“I don’t think this commission should put themselves above any citizen,” Souder said. He also asked if the action by Whitehead would “compromise the integrity” of the commission. Buckles said he did not think it would, but said members of the commission should “just use good common sense.”
The second complaint Harris received was filed by a voter whose complaint centered on cell phone use at the polls.
The man, who said he voted at Valley Forge precinct, reported when he voted in May he received a call on his cell phone while inside the poll and a poll worker “caused a scene” and told him to turn the phone off. He said when he went to vote in the August election he saw several people in the polling place talking on cell phones and nothing was said to them. The man said in his complaint that he felt he had been discriminated against.
Harris told the commission the Valley Forge precinct had a new officer during the August election who may not have been aware of the rule on cell phone use.
Members of the commission voted to certify the ballot for the November election, which will include general election races for state and federal offices as well as city elections for Elizabethton and Watauga. Harris said the November ballot will also include four proposed amendments to the state constitution.
Voters in the City of Elizabethton, as well as voters who reside in Carter County but are inside the city limits of Johnson City, will also see a referendum on the ballot regarding the sale of wine in grocery stores.
The November election will be held on Tuesday Nov. 4. Early voting for that election will be held from Oct. 15 through Oct. 30. The last day to register to vote in the November election is Oct. 6.