It’s time for a crash course in safety 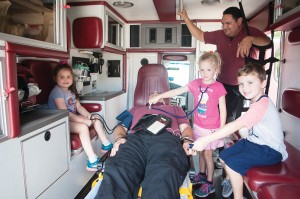 That’s what kindergartners at West Side Elementary learned during Safety Week at the school.
The kindergartners visited with the Elizabethton Fire Department Thursday at Station 2 on West G Street, the Carter County Rescue Squad and the Elizabethton Police Department. They were also instructed on the best behavior when riding school buses.
Kindergarten teacher Vera Peters said the day, and safety week, was a way to introduce the young students to different people in the community who are there to help them.
“This is a chance to let them get to know the community helpers,” Peters said.
The first stop of the day was at the fire station, where EFD Captain Rusty Barnett talked to the students about fire safety, “stop, drop and roll” and showed the students the fire equipment firemen use to extinguish fires.
“He showed us the ladder on the fire truck,” said Jacob Duffield. “It goes way, way up in the sky and it spins around.”
Eva Payne learned what to do if she is ever involved in a fire emergency.
“Stop, drop and roll,” she said.
And Abby Guinn enjoyed watching Barnett show the fire equipment.
“He showed us how he sprays a fire hose,” she said. “That was fun.”
From the fire hall the students went back to school, where they were told about what police and rescue squad workers do when they are out helping people. The kindergartners also took a look inside the police cruisers and the rescue squad vehicles.
Briana Miller offered a simple assessment of why the rescue squad was important for a community: “You will get hurt sometimes and the rescue squad will be there to help you.”
“They help people when they get hurt,” Ashton Bates added.
Another part of the lesson was school bus safety.
Bus driver Jimmy Hilton shared with the students how to behave on the bus, such as staying seated and not to stick their heads or arms out the windows. He also told them how to safely exit the bus.
Safety Week is an annual event at the school.