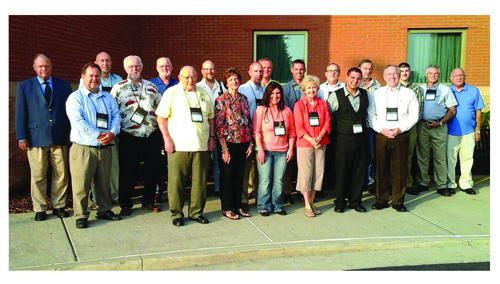 Several of Carter County’s newly elected officials, as well as some incumbents, recently took part in a special training session sponsored by the University of Tennessee’s County Technical Assistance Service.
The CTAS County Officials Orientation program was held in Murfreesboro on Aug. 26-27.
Carter County Mayor Leon Humphrey, who attended the orientation, said the program is a valuable training session for all county officials.
“The program, first and foremost, introduces those newly elected officials to the County Technical Assistance Services,” Humphrey said.
According to organization’s website, CTAS was created by the Tennessee General Assembly in 1973 at the urging of county officials and the Tennessee County Services Association. County officials asked for an agency to provide prompt, accurate technical assistance to the governments of Tennessee’s 95 counties.
“The authorizing legislation creating CTAS, a part of The University of Tennessee Institute for Public Service, directs CTAS to ‘provide studies and research in county government, publications, educational conferences and attendance thereto, and to furnish technical, consultative and field services to counties of the state in problems relating to fiscal administration, accounting, tax assessment and collection, law enforcement, and public works, and in any and all matters relating to county government,’” the website states.
Among the topics covered during the orientation were oaths and bonds; basis of authority; open meetings and public records laws; ethics and conflicts of interest; and personnel issues. In addition to the overall training, sessions were held with more specific training for the particular office attendees were elected to.
“It gives them a good introduction to county government, the legal aspects, the do’s and don’t’s,” Humphrey said. “It has given me access to resources I didn’t know existed.”
County Commissioner Mike Hill, who is a newly elected representative of the Second District, said he enjoyed the team-building experience the orientation provided.
“I got to know some of the people better than I did before,” he said. “We’ve got a good bunch of commissioners, we really do.”
He said the program was informative but “it was a lot of information in a really short time.” He added participants were given a lot of information to take home with them regarding statutes and legal issues.
Commissioner Danny Ward, who was recently elected to represent the Fourth District, said the information packets commissioners received will be a big help to those who attended.
“It gives us the ability to research and look things up on our own and to know the correct person to go to if we have a question,” he said.
Ward said he felt the orientation will benefit him as a commissioner. “I thought it was a great program,” he said. “I wish it had been longer so we could have gone more in depth.
“I wish everybody could have gone to it,” he added. “It would have helped to get everyone on the same page.”
Commissioner Beth Depew, a new commissioner representing the Third District, said she “really enjoyed” the training and found it to be interesting and informative.
“I think we should continue to go to training, whether we are new commissioners or incumbents because things change,” she said.
Other commissioners who attended the orientation program were Robert Gobble, Bobbie Gouge-Dietz, Sonja Culler, Randall Jenkins, Robert Carroll, Scott Simerly, Ross Garland, Ray Lyons, Larry “Doc” Miller, Isaiah Grindstaff, Jerry Proffitt, L. C. Tester, John Lewis and Al Meehan. Also attending the orientation were Circuit Court Clerk Johnny Blankenship and Road Superintendent Roger Colbaugh.