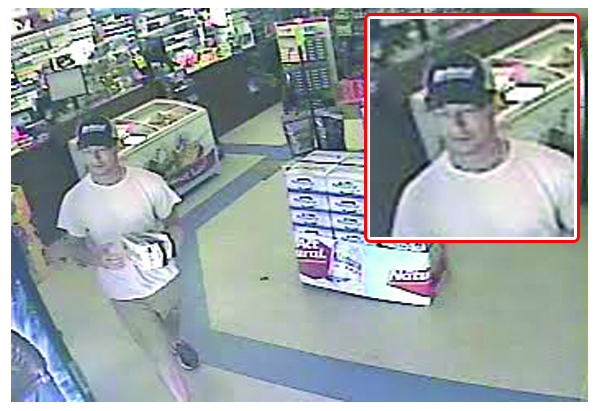 Police are seeking help in identifying the man seen in this surveillance video footage. According to police, the man is a suspect in a string of thefts which have occurred at local businesses.

Police are asking residents to help smoke out the identity of someone they say has been carting off cartons of cigarettes from city and county businesses.
“We are attempting to identify a male subject involved in multiple thefts that are being investigated by the Elizabethton Police Department and the Carter County Sheriff’s Office,” said Elizabethton Police Department Capt. Joy Markland.
According to Markland, a man has been entering local convenience stores and asking for several cartons of cigarettes, which the clerk places on the counter.
“He then distracts the clerk with a request of an additional item for purchase, and when the clerk diverts attention, the subject is taking the cartons of cigarettes and leaving the store,” Markland said.
The EPD and the Carter County Sheriff’s Department are investigating four incidents at four different local convenience stores, Markland said, adding that three of the locations were in the city and one was in the county. She said the incidents occurred between Aug. 24 and Sept. 4.
Markland said investigators are asking for the public’s help in identifying the man, whose picture was captured by a security surveillance system.
“He is described to be in his mid-20s to 30s, medium build, brown hair and approximately 5’8” to 5’10”, and was seen wearing some type of bandage on his hand/wrist area, which matches up to the photos we have received,” Markland said.
Anyone with information can call the Elizabethton Police Department at 542-4141, the Crime Stoppers Tip Line at 542-7574 or the Carter County Sheriff’s Department at 542-1845.