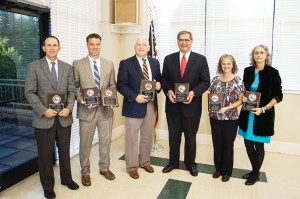 Neighbors helping neighbors.
That’s the focus of the 2015 campaign for the Elizabethton/Carter County United Way, which officially kicked off Tuesday morning.
The goal for the 2015 campaign is to raise $160,000 to benefit the nine local non-profit agencies that receive funding from the United Way. The goal is $4,000 higher than last year’s.
Chris Hitechew, 2015 campaign chair and director of the Elizabethton Northeast State Community College campus, said he believed the goal could be met in Carter County.
“There are a little more than 27,000 households in Carter County,” he said. “If a fourth of those households gave $25, our goal would easily be met.”
Hitechew said the theme of Neighbors Helping Neighbors was inspired by the Bible story of the Good Samaritan, when a man asked who his neighbor was. In the story, Jesus shares the story of the man who was beaten while traveling and was passed by two other people before a Samaritan stopped to help him.
Jesus then asked the man which of the people who passed the injured man on the road would that beaten man consider a neighbor. The man replied, “He that showed mercy on him.”
“When you ask yourself who is your neighbor, the answer comes down to those that are in need,” Hitechew said. “The United Way comes down to that, helping those that are in need.”
Last year’s chair, Dale Fair, president of Carter County Bank, was the impact speaker for the kickoff breakfast.
Fair encouraged United Way board members and agency directors to work to gain more donors and volunteers to be able to better leverage the donated funds into an even bigger benefit for the agencies.
“Every dollar is important,” Fair said. “Agencies can leverage one dollar for seven or eight times as much. That is why the United Way is so important. These agencies can’t survive without the funding they get from the United Way.”
Agencies for the 2015 campaign are Adult Day Services, American Red Cross, Assistance and Resource Ministries, Boys and Girls Club of Elizabethton, Personal Support Service, Contact Ministries, Elizabethton Senior Citizens Center, Sequoyah Council Boy Scouts and the Neighborhood Service Center.
The United Way also recognized the sector leaders from the 2014 campaign, which were Cline Holder Electric Supply for the contractors division; Carter County Bank for the financial division; Food City for the food service division; Sycamore Shoals Hospital for the health service division; Nuclear Fuel Services for the industrial division; Sam LaPorte for the professional division; East Tennessee State University for the public service division; Tetrick Funeral Home for the service division; and Mark and Kathleen Hamilton for the residential division.
Carter County Bank was also recognized as the highest overall contributor from the 2014 campaign. Fair was recognized for his continued service and dedication to the United Way.