Youngsters get a first-hand – and foot- taste of music 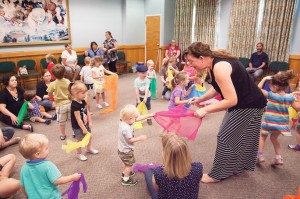 Music and learning came together for a fun-filled Storytime on Tuesday.
Youngsters gathered at the Elizabethton/Carter County Public Library to learn about music and stories from Kindermusik instructor Sonya Greear.
During the session, readers used their own hands and feet to make sounds, danced, played with musical instruments and read stories to music.
Kindermusik is music classes for children from toddler to 7 years old. Greear said the classes were not “serious” music lessons, but were fun learning sessions that would prepare children for more structured lessons if they chose to pursue them.
“We are not in the business of making great musicians,” Greear said. “We want to make well-rounded little people using music to help them learn.”
She said that in the beginning classes for the children age 1 and 2, the classes focus on having them keep a steady beat and to learn if a beat is fast or slow. As students get older, the beats become more complex and students start to learn about different cultural music, like Latin music, Native American music and Appalachian music.
Kindermusik classes for older children teaches youngsters ages 5 to 7 how to read music and play some musical instruments. Greear said children learn to play the glockenspiel, a miniature xylophone, a two-string dulcimer and a recorder.
“It can give children a good start and encourage their musicality,” she said. “When they graduate our program, they are ready to move on to formal music lessons. They have the attention span, and their fingers have the strength to play the instruments.”
While Kindermusik does teach some music skills, Greear said the classes are not just about music lessons.
“We have a lot of fun too,” she said.”
Elizabethton Kindermusik sessions are held at Westside Christian Church and are taught by Christy Dickison. For more information on Kindermusik, visit, kmroom.kindermusik.net.